Vibe upbeat around Cyclones' QB, not so much around Iowa's 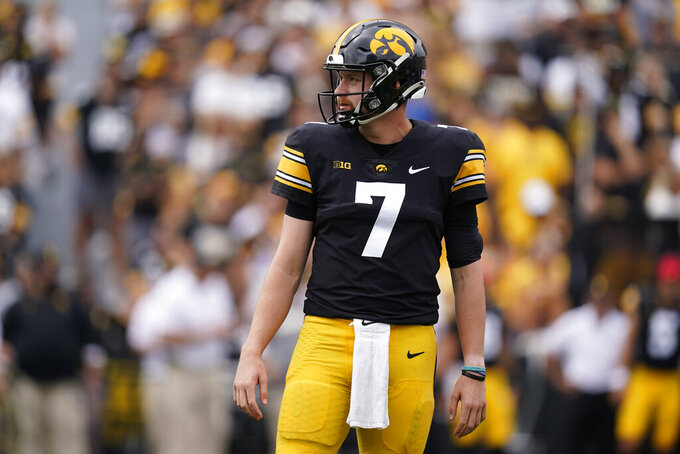 IOWA CITY, Iowa (AP) — Iowa and Iowa State head into Saturday's Cy-Hawk Game at Kinnick Stadium off season-opening wins, but the moods in Iowa City and Ames are decidedly different this week.

Iowa has won six straight in the series since the Cyclones last won at Kinnick in 2014. This will be the first time in three meetings that neither team is ranked.

Petras has been inconsistent throughout his three years as the starter, but his struggles have grown since the second half of last season. He was just 11 of 25 for 109 yards with an interception in the 7-3 win over South Dakota State, and the Hawks finished with just 166 total yards against their opponent from the Football Championship Subdivision.

The Hawks scored on a field goal and two safeties and became the first Big Ten team to win without a touchdown since Nebraska in 2018.

“It’s not realistic to think we’ll get away with that moving forward,” Ferentz said.

Petras said he began reviewing video of the game shortly after it ended. He declined to discuss what he saw.

“I appreciate the question,” Petras said Tuesday. “But we’re just fired up to improve and beat the Cyclones on Saturday.”

His teammates were taking the same approach.

“I’m trying to stay away from all of the negative stuff,” wide receiver Arland Bruce IV said. “It’s not good for the mind.”

Iowa is 14-6 with Petras as the starter, but in his last seven games he has completed just 51% of his passes and thrown for one touchdown against eight interceptions.

While Iowa fans debated whether Alex Padilla should take over for Petras, Ferentz said the issues went beyond quarterback play.

“If we play well cohesively, I expect (Petras) to play well in his role,” Ferentz said. “The biggest thing right now is giving him more help.”

Petras is without wide receivers Keagan Johnson and Nico Ragaini, who were expected to be starters but are out indefinitely with injuries. Bruce led the Hawkeyes with five receptions last week; no other wide receiver had a catch.

“It’s obviously a challenge,” Petras said. “Football is a game of injuries, unfortunately. There are going to be injuries moving forward. That’s just the way football is.”

Iowa State's Dekkers completed 25 of 31 passes for 293 yards and four touchdowns in his first game as successor to Brock Purdy. The four passing TDs were most by an ISU quarterback in his first start, and Dekkers' passing yards total was second.

Cyclones coach Matt Campbell said he expected Dekkers to play well against the Redhawks of the FCS.

That's because Dekkers was able to take meaningful snaps when Purdy was hurt or ineffective last year, including in the fourth quarter of last year's 27-17 loss to the Hawkeyes. Campbell said he also was impressed with how the big left-hander prepared in the offseason.

“I love what he’s about,” Campbell said. “I love his process how he gets himself there. Hunter obviously is a great competitor. He wants to be the best. Those are traits that you want your quarterback to have. You want to put the ball in his hands and let those guys go make plays.”

Dekkers will face a much stiffer challenge against what appears to be another outstanding Iowa defense. The Hawks held South Dakota State to 87 yards passing and 120 total.

Dekkers said it's good to have that first start behind him.

“The whole game I expected (nerves) to show up but they never did," he said. It felt like a normal game, just a little different playing the whole game."

He said he didn't read much into the Cyclones' easy win in the opener.