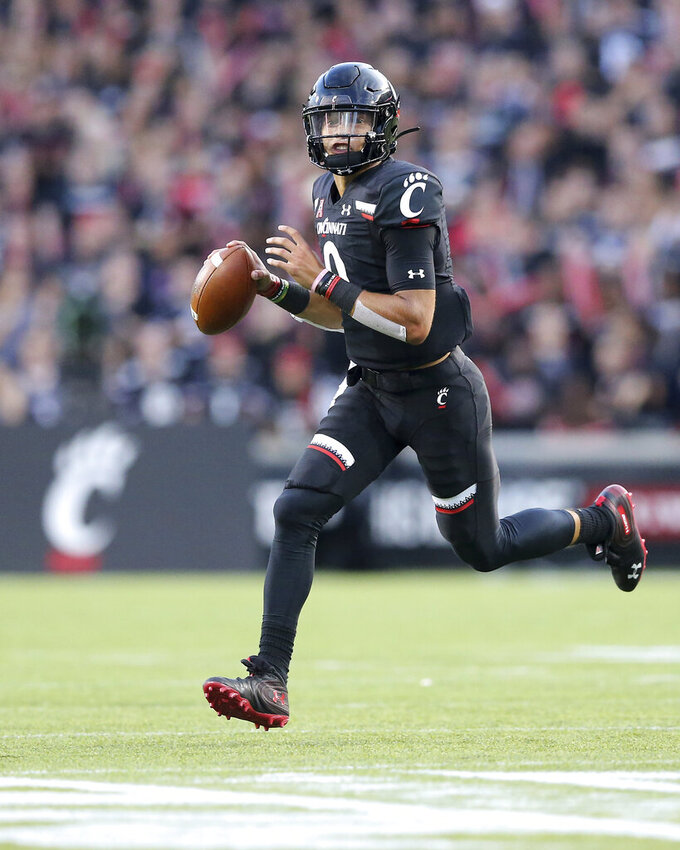 Cincinnati quarterback Desmond Ridder rolls out of the pocket during the first half of the team's NCAA college football game against UCLA on Thursday, Aug. 29, 2019, in Cincinnati. (Kareem Elgazzar/The Cincinnati Enquirer via AP) 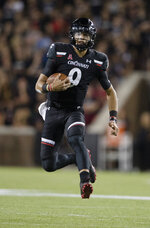 Cincinnati was more than ready for prime time — even sophomore safety Ja'von Hicks.

Hicks led an opportunistic Bearcats defense with an interception and fumble recovery, junior running back Michael Warren II scored one touchdown on the ground and caught one of sophomore quarterback Desmond Ridder's two scoring passes, and Cincinnati beat the UCLA Bruins 24-14 on Thursday in the teams' season-opener before a raucous crowd of 38,032 at venerable Nippert Stadium.

Despite losing his voice in the first half, forcing the offense to use silent counts, Ridder also connected with graduate-transfer tight end Josiah Deguara for a touchdown. Senior kicker Sam Crosa added a 44-yard field goal.

"Desmond did a good job of managing the game," said third-year coach Luke Fickell, who led Cincinnati to an 11-2 record last season. "He was slinging and the throwing the ball well early."

Hicks came up with a fumble recovery and an interception for the Bearcats, earning a game ball while starting in place of injured junior James Wiggins.

"Everybody was very proud of Ja'von," said senior linebacker Perry Young, who also had an interception. "He got a little emotional when he got the game ball in the locker room."

Hicks didn't have a perfect night. The local product whiffed on an open-field tackle in the middle of the field on junior wide receiver Demeric Felton's 75-yard touchdown catch-and-run in the second quarter and was whistled for a facemask penalty in the third quarter, but Fickell liked the way Hicks responded to the mistakes.

"Overcoming mistakes is huge," said Fickell, pointing out that Hicks symbolized the whole Bearcats team. "They have the confidence that comes from winning. They learned last year how to work through it. There wasn't a panic."

UCLA sophomore quarterback Dorian Thompson-Robinson was 8-for-26 for 156 yards and two TDS, the 75-yarder to Felton and a seven-yard scoring toss to sophomore wide receiver Chase Cota. Thompson-Robinson also lost his grip on the football twice and threw two interceptions, personally accounting for all four UCLA turnovers.

"I was horrible," Thompson-Robinson said. "We have to look at the film It was very disappointing, not only because we didn't get the win but looking at these guys faces."

"Fumbles and interceptions aren't always the quarterback's fault," UCLA coach Chip Kelly said. "We will look at the film and reassess what happened. Dorian has a confident way about him. You could tell it hurt, but I don't worry about him."

Cincinnati knocked off UCLA in the opener for the second straight season. The Bearcats beat the Bruins 26-17 at the Rose Bowl last season.

Displaying first-game rust, the two teams combined for 19 penalties, costing them a total of 123 yards. Fickell admitted it "wasn't the prettiest thing in the world."

"It wasn't very clean," Fickell said. "To get this under our belt is huge."

"We have 87 freshmen and sophomores," Kelly said. "We have 48 players that weren't here last year. It was their first game, their first time on a plane. We have to pack Similac instead of Gatorade."

The Bearcats never trailed after Ridder and Deguara teamed up on a 16-yard scoring pass following Hicks' recovery of a Thompson-Robinson fumble at Cincinnati's 17-yard line on UCLA's first possession of the season.

Warren scored on a bruising 12-yard run on Cincinnati's fifth play after senior linebacker Perry Young intercepted Thompson-Robinson at UCLA's 30-yard line on the Bruins' first possession of the second half. The junior running back celebrated by dancing across the end zone and tugging his right fist up-and-down as if he was tooting a train whistle.

Bruins' sophomore cornerback Elijah Gates pried the ball out of Bearcats' junior running back Gerrid Doaks's grasp and senior linebacker Jason Harris recovered for UCLA, but the Bruins went nowhere but backward on the ensuing possession in the second quarter.

Bruins sophomore CB Jay Shaw intercepted Ridder at the goal line and returned it to the Cincinnati 34-yard line before being flagged for unsportsmanlike conduct. Senior center Boss Tagaloa was called for the same penalty on the next play.

UCLA senior linebacker Krys Barnes thought he had a touchdown after recovering a Warren fumble late in the game, but officials ruled that Warren was down before the ball came loose, a ruling confirmed by replay. Warren was shaken up on the play but walked off.

UCLA: Kelly will have to wait another week to log the 50th win of his college career. He is 3-10 in his second season with Bruins, more losses than the seven he incurred in four seasons with Oregon.

UCLA: The Bruins are scheduled to play their home opener on September 7 against San Diego State.

UC: The Bearcats are scheduled to travel to Columbus, Ohio, to face No. 5 Ohio State on September 7.