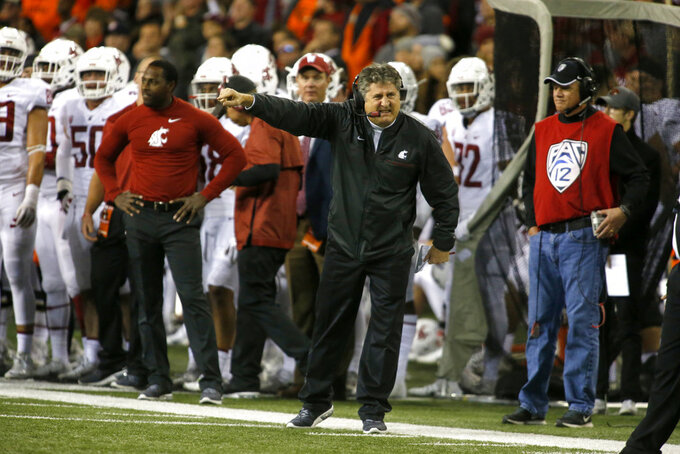 SPOKANE, Wash. (AP) — Washington State was expected to be in a rebuilding year, picked to finish fifth in the Pac-12 North this season. The Cougars, however, have opened some eyes by posting a 5-1 record going into their bye week.

Don't count Coach Mike Leach among those who think the Cougars have exceeded expectations.

The Cougars opened the season with questions at quarterback, on defense and with half a dozen new assistant coaches.

But so far, they haven't skipped a beat from last year's team that finished 9-4.

They opened with big victories over Wyoming, San Jose State and Eastern Washington. They squandered a double-digit lead to lose 39-36 at Southern California. Then they rebounded with solid wins over Utah and Oregon State to improve to 2-1 in the Pac-12.

About the only place they aren't getting any respect is The Associated Press Top 25. The Cougars got 46 points in the latest poll and are three places short of breaking into the Top 25.

Leach doesn't worry about acclaim from the experts either.

"We won a bunch of games in the last three years and they didn't think we were any good those years either," Leach said of predictions his team would finish fifth. "If I valued their opinions, they would get a call asking them what plays to run.

"None of those people got one call."

Some players also say they are unburdened by predictions.

"I don't really listen to the noise," wide receiver Tay Martin said Saturday, after a 56-37 victory over Oregon State. "We talk about it all year: Don't listen to the noise. We just have faith in our group and know what we want to do."

The Cougars are just one victory away from qualifying for a fourth consecutive bowl game. That has never been accomplished in the program's history dating to 1894.

Things are about to get tougher for the Cougars.

While their first six opponents are a combined 14-29 this season, the second half of the schedule is all conference games. That includes three opponents in the Top 25.

They start by hosting No. 17 Oregon on Oct. 20. Still to come are games against Stanford, California, No. 19 Colorado, Arizona and No. 7 Washington.

The outcome of those games will determine if the annual Apple Cup game against Washington has Pac-12 title implications for the third consecutive season.

Quarterback Gardner Minshew, a graduate transfer from East Carolina, has been the breakout star for Washington State.

Minshew planned to play his final season as a backup at No. 1 Alabama, preparing for a coaching career. But Leach called and asked if he would like to come to Pullman and lead the nation in passing.

Minshew is doing just that. He has started all six games and leads the country in completions (313) and passing yards (2,422). He's thrown for 19 touchdowns with just four interceptions and has brought a new mobility and quite a bit of swagger to the quarterback position.

He threw an 89-yard touchdown pass late in the fourth to beat Utah, then came into the interview room wearing dark aviator sunglasses. He said he was channeling Tampa Bay quarterback Ryan Fitzpatrick.

"He's a grinder and he's got a lot of swagger," Minshew said.

Minshew has thrown for at least 300 yards in all six games and could threaten school passing records if he continues at this pace. Seven different receivers have caught at least 19 passes so far. The Cougars' Air Raid offense averages nearly 42 points per game while allowing 23.8 per game.