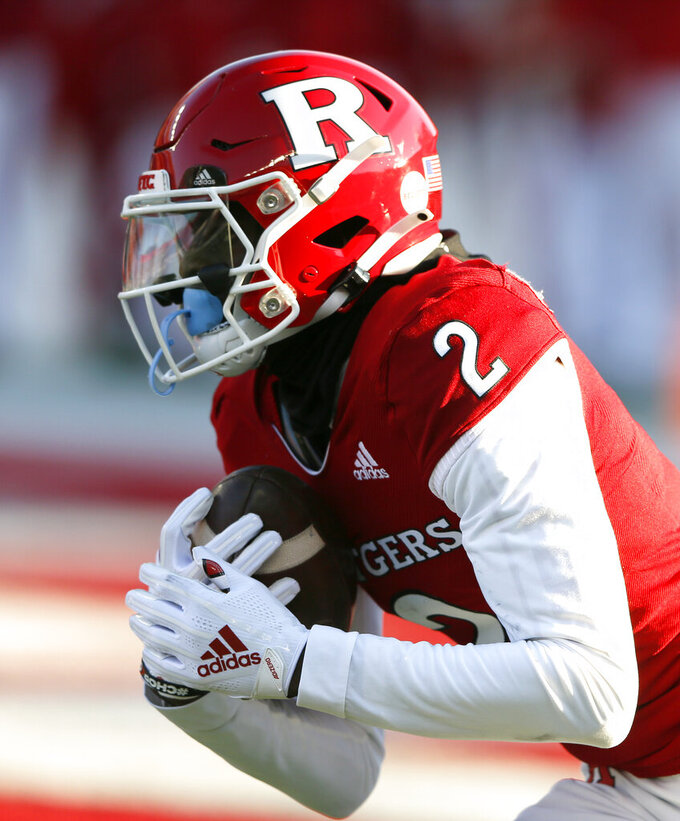 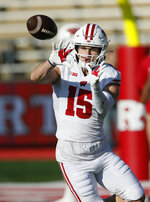 PISCATAWAY, N.J. (AP) — Not only has Wisconsin put its horrid 1-3 start behind it, everything is suddenly within reach for the Badgers.

Graham Mertz threw a season-high three touchdown passes and Wisconsin won its fifth straight game and become bowl eligible for the 20th straight year with a 52-3 victory over Rutgers on Saturday.

“I can say about everyone on the team, guys are truly putting out during the week,” said Mertz, who was 11 of 16 for 240 yards."We see the work that everybody puts in and it’s getting to a special place. So got to keep building on it."

This game might have been the most complete of the season for the Badgers (6-3, 4-2 Big Ten). They got contributions from all three phases of the team in rolling up 579 yards yards in total offense and limiting Rutgers (4-5, 1-5) to 207.

Coupled with No. 20 Minnesota’s loss to Illinois, Wisconsin will have a share of first place in the conference’s West Division after opening the season with its worst since 1990. Win out and they play for the Big Ten title.

Wisconsin coach Paul Chryst drew some laughs when asked if the start seemed light years ago.

““I remember every game,” he quipped. "You have to maximize each week. You put all your focus and energy in that. And I appreciate that the guys are doing that.”

Chez Mellusi, Braelon Allen and Jackson Acker each ran for a touchdown and cornerback Caesar Williams highlighted a dominant performance by the Badgers' top-ranked defense by returning an interception 29 yards for a TD.

Mertz's touchdown passes covered 1-yard to John Chenal, 25 yards to Kendric Pryor and 72 yards to Danny Davis as the Badgers had their biggest point production since scoring 61 against Central Michigan early in 2019.

Rutgers lost for the fifth time in six games in seeing its hopes for a first bowl bid since 2014 take another hit after a 3-0 start. The 52-points tied Ohio State for most allowed by the Scarlet Knights this season.

Rutgers has to win two of its final three games to become bowl eligible with Indiana, Penn State and Maryland left.

“It’s our story to write so that that’s what we’re going to do in the best way we can,” Rutgers safety Avery Young said. “So that means, of course, the expectations a bowl games, we have more than enough opportunities left in the season to get that done. So the only move is to chop. That’s all we know.”

Wisconsin never trailed in beating Rutgers for the fourth time in as many games.

Mellusi, who led the game late with an undisclosed injury, opened the scoring with a 14-yard run on the second play after linebacker Noah Burks intercepted Noah Vedral's first pass and returned it to the Scarlet Knights 15.

Val Ambrosio's 24 yard field goal on the ensuing series were Rutgers' only points. The Badgers scored 24 in the second quarter to put the game away.

The turning point came after a short field goal by Collin Larsh. Former Badger Aron Cruickshank fumbled on the ensuing kickoff return and that set up the short, fourth-down TD pass by Mertz. Fourteen seconds later, Williams scored on the interception return and the rout was on.

Scarlet Knights defensive end and co-captain Mike Tverdov and receiver Brandon Sanders did not play for a violation of team rules.

The Badgers are forcing turnovers galore. They had eight in beating nationally ranked Iowa and Purdue in the previous two games. They added four more against Rutgers Saturday. The Scarlet Knights were limited to 207 yards. They had four in the first six games.

Wisconsin: Returns home to face Northwestern on Saturday. They end the regular season with games at home against Nebraska and then at Minnesota.

Rutgers: At Indiana on Saturday.