Anxious for a win, Syracuse travels to No. 25 NC State 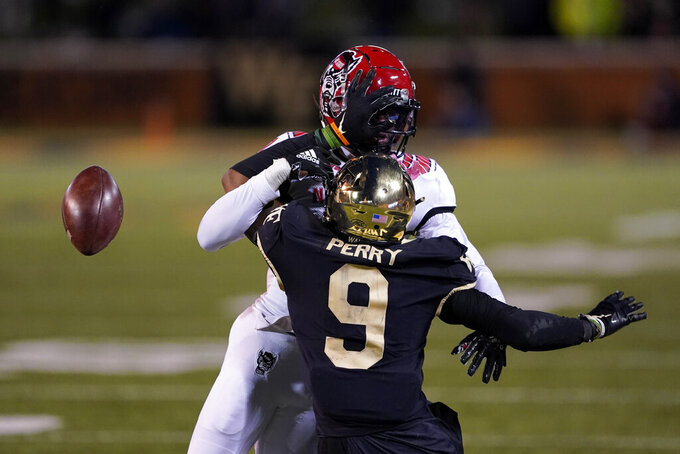 Syracuse is one victory shy of reaching bowl eligibility as the Orange finish the season with a pair of games against ranked teams.

First is a matchup at No. 25 North Carolina State (7-3, 4-2 Atlantic Coast Conference) on Saturday, and the Orange (5-5, 2-4) are coming off their worst performance of the season. Louisville beat them 41-3 last week and held Syracuse's potent run game to nearly 100 yards below its average.

The setback came after the Orange had a week off.

“The bye week can be a trap,” Orange redshirt senior defensive end Josh Black said. “Having that game element on a week-to-week basis is very critical for keeping up your speed, your performance, your intensity. I thought we were really caught off-guard on really how fast the game was able to move.”

The Orange will face a defense that leads the ACC against the run, allowing just over 100 yards per game. Syracuse is the conference rushing leader, averaging 236.7, and tailback Sean Tucker is ranked second nationally with an average of 136.2.

“We have to go back to our playmakers being able to make these plays," Black said. “We’ve got to make sure we take it to them, make sure we dictate to them.”

NC State missed its chance to take control of the Atlantic Division race, losing last week at No. 13 Wake Forest in a matchup of the division’s top two teams. The Wolfpack have to finish strong and hope to catch a break or two.

NC State, 12-2 all-time against Syracuse and 6-1 at home, must win out to have any chance of claiming the division if the Demon Deacons lose their last two games. The Wolfpack finish at home against rival North Carolina.

“I’m not going to wish ill will for anybody,” Wolfpack coach Dave Doeren said. “I’m going to cheer for us. And cheering for us means we want everyone to lose that needs to lose. I have to focus on what we control on this side of it.

“Lord knows, we’ve had enough bad luck throughout the years. It would be great to have a little good luck down the stretch here.”

Both NC State and Wake Forest repeatedly had players go down with injuries last week, leading to players shuffling in and out of the lineup. The list included defensive lineman Daniel Joseph going down multiple times with various issues, while running back Zonovan Knight — who had a 100-yard kickoff return for a touchdown — limped off with an apparent injury to his right leg.

Tucker enters the game with 1,362 yards rushing and needs just 11 yards to break the school record set by Joe Morris in 1979. Tucker was held to 95 yards on 19 carries by the Cardinals, which snapped his seven-game streak of 100-yard games.

“We're just trying to put that behind us. Moving on,” Tucker said. “We've got two more games to win. Getting a win as soon as possible would definitely take (pressure) off. Either way, we definitely hope to win out.”

While NC State no longer controls its own destiny in the division, the Wolfpack still have a chance to finish with 10 wins for only the second time in program history.

“I think we’re very like confident in ourselves to finish out the way we’re supposed to,” receiver Thayer Thomas said. “And then also, we know we still have a chance in this thing. We’ve just got to do our part and then hope and pray.”

NC State quarterback Devin Leary has put together a strong season that's been overshadowed by some of the higher-profile passers in the ACC — Pittsburgh’s Kenny Pickett, UNC’s Sam Howell, Wake Forest’s Sam Hartman and Virginia’s Brennan Armstrong. Leary is 14th in the Bowl Subdivision ranks, averaging 288.3 yards per game, and is tied for seventh with 29 touchdowns. He’s coming off a 408-yard effort at Wake Forest.