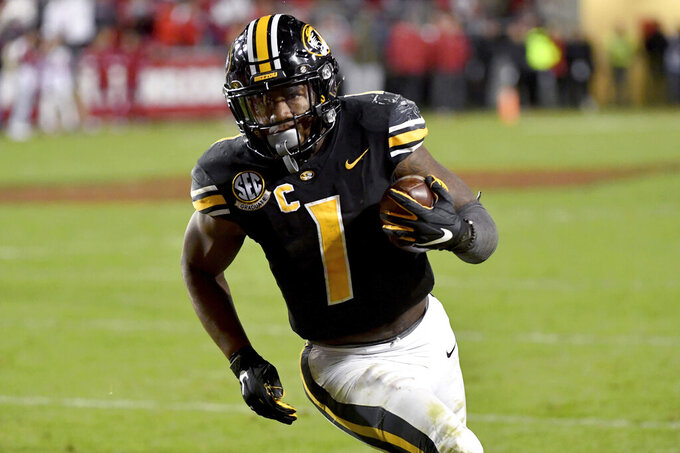 Line: Army by 4½, according to FanDuel Sportsbook.

Army is trying to keep its perfect record in the Armed Forces Bowl intact after three previous victories. That includes back-to-back wins in 2017-18, when the Black Knights had two of the three 10-win seasons in program history. Army is 4-0 in Dallas-area bowl games. Missouri is looking for its 10th victory against the service academies. One of its four losses was 35-13 to Navy in the 2009 Texas Bowl.

QBs Christian Anderson and Tyhier Tyler and Army's triple option against Missouri's run defense. The Black Knights are second nationally in rushing yards per game at 284. The Tigers are 125th out of 130 FBS teams, allowing 229 per game. Anderson has 519 yards and six touchdowns rushing. RB JaKobi Buchanan has 237 consecutive carries without losing yardage.

Army: LB Andre Carter II is the first Army player in 31 years to be an AP All-American. He was a third-team choice and finished second nationally to Alabama's Will Anderson with 14.5 sacks.

Missouri: QB Brady Cook was named the starter the day before the game as the Tigers have uncertainty at the most important positions after RB Tyler Badie skipped the bowl game to prepare for the NFL draft. Badie was third nationally with 1,604 yards rushing in the regular season. Connor Bazelak has played the most but been injured and had issues with turnovers. Tyler Macon also has seen time at QB.

It's the first meeting between the teams since 1982, when Missouri won 23-10. ... The game will be played in prime time for the first time since 2006. ... Missouri coach Eliah Drinkwitz is 8-0 as an assistant and head coach in bowls. This is the first time he will coach the Tigers in a bowl. Last season's Music City Bowl was canceled because of COVID-19. ... Army faces an SEC opponent for the first time in 10 years. The Black Knights lost to Vanderbilt 44-21. ... Missouri is new to the Armed Forces Bowl, but not to the postseason in the Dallas area. The Tigers are 2-1 in the Cotton Bowl, mostly recently beating Arkansas 38-7 to cap the 2007 season. Missouri was still in the Big 12 at the time. ... Army coach Jeff Monken, who is 57-43 in his eighth season, can tie Charles Daly for second all-time in victories. Red Blaik (1941-58) is the leader. He was 121-33-10.