East Carolina next to try to slow down No. 7 Cincinnati 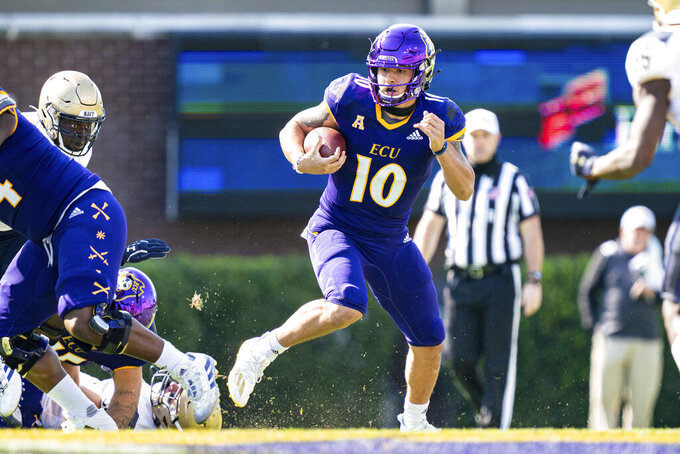 CINCINNATI (AP) — Cincinnati has had one of the nation's stingiest defenses the past three years. But last season, East Carolina scored 43 points and piled up 638 yards against the Bearcats.

“For us, it’s a redemption tour," Fickell said. "Whether it’s Memphis, who beat us twice, or ECU with the numbers they put up against us. Things that happen last year don’t easily go by the wayside. You don’t easily forget.”

No. 7 Cincinnati (6-0, 4-0 AAC) faces the Pirates again on Friday night, with the Bearcats looking to extend their school-record home winning streak to 19 and keep alive their hopes of crashing the College Football Playoff.

The Bearcats have held their last five opponents to fewer than 13 points, including the high-octane offenses of Houston, Memphis and SMU. ECU (1-5, 1-4 American) is averaging nearly 30 points and 400 yards per game.

“Sometimes the record isn’t indicative of a team," Fickell said. “If you’ve got a quarterback like they do, it gives them a lot of confidence. It’s a team on the rise.”

ECU senior quarterback Holton Ahlers has passed for 1,354 yards and 12 touchdowns. The Bearcats also are wary of sophomore receiver C.J. Johnson, who has 13 catches for 286 yards and a team-leading four touchdowns this season. In last year's meeting, a 46-43 Bearcats victory, Johnson had 12 catches for 283 yards and a TD.

Cincinnati has outscored opponents 236 to 70 this season.

“When you look at their roster, the same guys have been playing for multiple years," ECU coach Mike Houston said. “They are seniors backed up by juniors across the two deep. We played well against them offensively last year. Obviously, having to travel up there and playing on the road will be tough.”

Cincinnati senior running back Gerrid Doaks rushed for a career-high 184 yards in last week's win over Houston. Junior quarterback Desmond Ridder has accounted for 13 touchdowns in the past three games, including eight rushing TDs.

“They have a lot of quarterback design stuff with reads off the backside of the run," Houston said. “With the way (Ridder) runs, you have to account for him. It’s something that will be a challenge this week.”

The Bearcats also are getting healthy, with receiver Alec Pierce and cornerback Arquon Bush set to return. They also are motivated after dropping one spot in the AP Top 25 rankings this week despite the 38-10 win over Houston.

“I want us to be greedy. Greedy to want more," Fickell said. "It creates a little chip on our shoulder. You try to find things that can keep you on edge, keep you motivated. I want us to stay humble, hungry and focused as much as we possibly can.”

With no fans or students permitted to attend games at Nippert Stadium due to COVID-19 rules, it won't be the fondest of farewells for Cincinnati's 18 seniors Friday. “This is 2020," Fickell said. "It's hard to get your brain around anything. We want to have some way of honoring these guys and saying thank you.” Immediate family members of the players and coaches are allowed to attend games and a pregame ceremony is planned.

Fickell said he's in favor of an expanded playoff in college football, which would benefit non-Power 5 teams like the Bearcats. “There's no doubt," he said. “I don't know how exactly it happens. It's never going to be college basketball with that many teams. I think it would add something to college football. I think it would give some more opportunities to not just the top 2 or 3%, the (teams) that are notoriously there.”

Houston announced that freshman defensive tackle Traveon Freshwater is switching to tight end. “He has some God-given ability,” Houston said. “Traveon and I have talked multiple times. It was a combination of continuing to develop the tight end room as well as Traveon’s desire to get back to the offensive side of the football.”

Cincinnati's game at Tulsa, which was scheduled for Saturday, Dec. 5, has been moved to Friday, Dec. 4. The Bearcats' game at Central Florida on Nov. 21 will kick off at 3:30 p.m. ET.