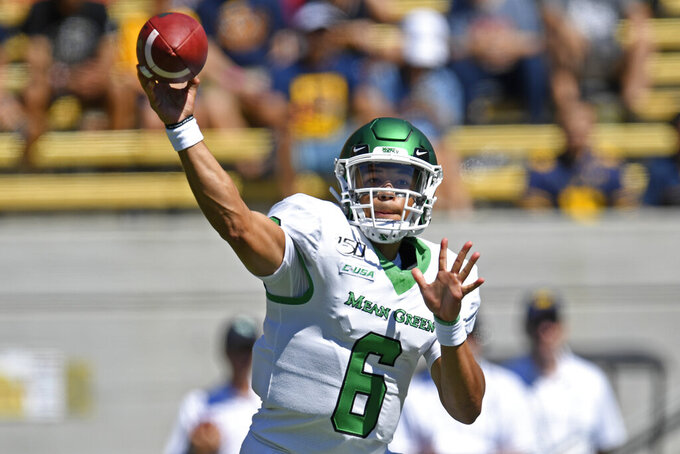 "We executed well in the first half, especially the first quarter, then we kind of went into a lull," Garbers said. "We have to play a lot better. It starts with me. I just have to put balls in the right spot. Everywhere else we just have to execute better."

Garbers passed for one touchdown after using his legs to get California's offense going, Greg Thomas kicked three field goals and the Bears beat North Texas 23-17 on Saturday.

Christopher Brown Jr. ran for 47 yards and a touchdown while Cal's defense had six sacks and forced two turnovers. The Bears are 3-0 for the third time in three years under coach Justin Wilcox.

Cal won despite being held to three points over the final three quarters.

Cal dominated on both sides early in the first-ever matchup between the two schools then held on after North Texas made a late surge. The Mean Green pulled within 23-17 on Mason Fine's 18-yard TD to Jyaire Shorter late in the fourth quarter and got the ball back with less than two minutes remaining but turned it over on downs.

Garbers was a big factor for the Bears staying unbeaten, one week after Cal's stunning 20-19 win over then-No. 14 Washington in a game that was delayed by weather for more than 2½ hours. Garbers repeatedly burned the Mean Green with keepers and scrambles while running for a career-high 70 yards on 18 carries despite North Texas frequently stacking the box.

"We saw, prepping for them this week, that the QB run game was going be a big part of our game plan and we just had to go execute," Garbers said. "It's fun to be two-dimensional, a dual threat. But as a quarterback you try not to take as many hits. You just have to do what you do for the team."

Garbers' 19-yard run on third-and-3 set up Cal's first touchdown. He also scampered for 12 yards on a keeper later in the first quarter, three plays before finding Nikko Remigio for a 36-yard touchdown.

Remigio, who had a slicing 31-yard punt return to set up the drive, caught the ball at the 12, spun away from safety Taylor Robinson and ran into the end zone for his first career touchdown.

"On film they would bite pretty hard to any stick we were giving so I gave (Robinson) a stick inside and was able to get open," Remigio said. "I felt him coming hard to the corner over the top, which allowed me to undercut it and go under him and in the end zone."

Fine completed 21 of 40 attempts for 210 yards and two touchdowns to surpass the 10,000-yard mark for his career but the Mean Green (1-2) fell behind big for the second straight week and couldn't recover.

"I thought we outplayed them in the second half but we dug ourselves a hole early and it's hard to overcome that amount of points," North Texas coach Seth Littrell said. "There's a number of things we can continue to grow on."

Cal had fallen behind 10-0 in each of its first two games and won both times. The Bears didn't have to rally against North Texas, scoring on their first four possessions to take a 20-0 lead after one quarter.

YELLOW ON THE GREEN

North Texas couldn't get out of its own way in the first quarter. The Mean Green were called for two personal fouls on the opening drive, then had a key facemask penalty later that sustained another Cal scoring drive. "Especially against a team like Cal, it's hard to overcome the miscues that we had," Littrell said.

North Texas: The Mean Green were outmatched and couldn't recover from the sluggish start. There's plenty of blame to go around, from a lack of discipline early to conservative play-calling early that failed to take advantage of Fine's strong arm. North Texas hasn't beaten a Pac-12 school since 1995.

California: The Bears very well could break into the Top 25 after being a few votes shy last week. Garbers' running made up for an uneven day passing (9 of 22, 129 yards), something he'll have to improve if Cal is going to make a serious push in the Pac-12. The defense was solid, and Remigio continues to give the special teams a spark. Brown wasn't able to finish the game, and Wilcox declined to say why.

North Texas: The Mean Green return home to host the UTSA on Sept. 21 in the Conference USA opener for both teams. North Texas has won the last two games in the series.

California: Plays at Mississippi on Saturday.