'It's all legal': Foreign college athletes cash in at home 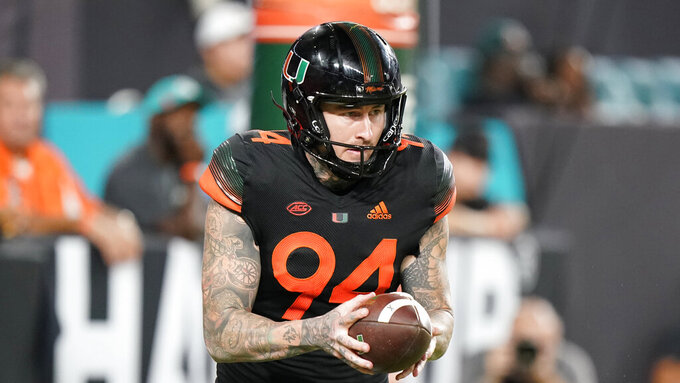 FILE - Miami punter Lou Hedley prepares to punt during the second half of an NCAA college football game against North Carolina State, Oct. 23, 2021, in Miami Gardens, Fla. Hedley is among thousands of international student athletes who can’t earn income from their name, image and likeness on U.S. soil. Some are trekking home to do it. Hedley had to fly 13,000 miles to western Australia to cash in on his name. (AP Photo/Wilfredo Lee, File)

LONDON (AP) — Miami punter Lou Hedley had to fly 13,000 miles to western Australia to cash in on his name.

The tattooed Aussie and thousands of other international athletes at American colleges have been told they can't profit from their name, image and likeness on U.S. soil — though interpretations vary about what constitutes work — so some are trekking home to do it.

In Hedley's case, it was a 37-hour journey that included a long stopover in Qatar.

“It's a pain in the backside having to fly over but it's all worth it,” Hedley told The Associated Press after a day of filming promotional spots for LifeWallet in the city of Perth, where he was also visiting family before his final season with the Hurricanes this fall. “I feel like I deserve to get a little bit of money, I've contributed wealth to the team (with) my name, image and likeness ... so it was good to kind of get compensated for what I've been doing the last three years."

Hedley declined to specify an exact figure but confirmed his NIL deal is in line with his teammates at roughly $50,000. Miami attorney John Ruiz has been actively enlisting Hurricanes on NIL deals through his LifeWallet healthcare company.

The 28-year-old Hedley, one of many Aussie punters in college football, said he didn't sign anything until he touched down Down Under.

“The work is all done here, paid for over here. As long as I’m doing all my work in Australia, I’m getting paid in Australia, paying taxes in Australia and all that stuff, it’s all legal," he said.

Nebraska basketball player Jaz Shelley also made a trip home to Australia for NIL deals, and teammate Isabelle Bourne planned to follow suit. Mustapha Amzil, a 6-foot-9 forward at Dayton, announced on social media that when he plays for the national team of his native Finland this summer he will be “open to any business and sponsorship deals.”

On the whole, though, international athletes are finding the NIL waters tricky to navigate, with mixed messages about what's OK, even now almost a year after the NCAA lifted restrictions.

Some schools have told them to avoid NIL deals altogether because they could jeopardize their visa status. Others say off U.S. soil is fine. Ultimately, the federal government is the arbiter of visa questions and deportations.

“There’s a ton of ambiguity,” said Casey Floyd, co-founder of NOCAP Sports, which is working with athletes to secure deals and advocating for regulatory clarity. “You go to some schools and they are very flexible ... and then you have a lot of schools that they just don’t want to touch it because they’re so scared of the ramifications.”

West Virginia's international athletes, for example, “are not participating in NIL opportunities due to the current application of federal immigration regulations,” spokesman Michael Fragale said. Drexel asked its foreign athletes to “please refrain from entering into a NIL agreement or engaging in compensated NIL activity,” Mladenka Tomasevic, executive director of the International Students and Scholars Services, wrote in February.

It's a different story at Nebraska, where the women’s basketball program tweeted: “International NIL made possible!” adding that when Shelley and Bourne arrive on Australian soil "they will be legally eligible to participate in NIL activity.” Shelley then promoted her T-shirts and hoodies, as well as a Lincoln restaurant.

The University of Florida told its internationals planning NIL activity in their home countries to “ properly document their physical location ” by providing form I-94 arrival/departure records, ”flight itinerary, and port of entry stamp showing abroad.”

Cal basketball player Sam Alajiki of Ireland hopes to stay around Berkeley to promote Next Up Recruitment, a company based in Manchester, England, that helps athletes land scholarships.

“He's literally going to be retweeting content. There's no way that can be deemed as work,” said Next Up founder Ryan Cook, who has also explored holding payments in escrow or becoming an administrator of Alajiki’s social media account and publishing that way.

“The last thing we want to do is break anyone's visa status,” he said. “We're working with the Cal compliance team, as well, to make sure everything is OK. We’ve not received any pushback.”

Just in case, though, the deal doesn’t begin until September. By then, there may be specific guidance from the NCAA or relevant government agencies.

The NCAA’s initial advice said international athletes are covered by the interim NIL policy but that students “may consider” consulting with their school’s compliance official “for guidance related to maintaining their immigration status and tax implications.” If they have questions, they should write to the U.S. Student and Exchange Visitor Program.

That program — SEVP — “continues to assess” the issue, said Sarah Loicano, a spokeswoman for U.S. Immigration and Customs Enforcement.

Kentucky forward Oscar Tshiebwe of Congo is among those calling for Congress to help foreign student athletes. The AP player of the year, who is returning for his senior season, recently met with Senate Minority leader Mitch McConnell, R-Ky., to make his case. The financial benefit to Tshiebwe could exceed seven figures.

“Lately I’ve been really focused on my athletic path," said Honig, who was recruited as a quarterback. "I think I need to get on the field first and perform on a high level before I need to worry about NIL.”