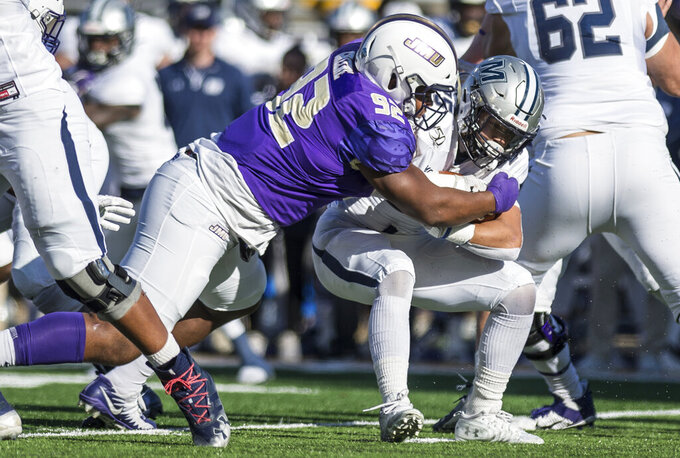 HARRISONBURG, Va. (AP) — Ben DiNucci accounted for four touchdowns, Percy Agyei-Obese ran for three and James Madison took a 66-21 victory Saturday in the second round of the FCS playoffs.

The second-seeded Dukes (12-1), whose only loss came in a 20-13 loss at West Virginia in their opener, rolled up 623 yards offense and set a school record for points in a playoff game. James Madison is in its sixth straight postseason and is the only school besides North Dakota State to win an FCS title in the past eight seasons, that coming in 2016.

DiNucci was 21-of-25 passing fro 273 yards and two touchdowns and he rushed for 66 yards and two more scores before giving way to start the fourth quarter. Agyei-Obese scored from 9 yards out and twice from a yard.

The Hawks (10-3), who were on a nine-game win streak this season after a first-round win last week, started the game with a Big South-record 93-yard scoring run by Pete Guerriero on their first play from scrimmage. But 93 yards would be Monmouth's net rushing yardage at game's end. Kenji Bahar passed for 173 yards with a TD and an interception that Charles Tutt returned 79 yards for the game's final points.

Lonnie Moore's 93-yard kickoff return gave Monmouth a 14-7 lead just two minutes later but the Hawks scored just once more to tie the game at 21 to start the second quarter.

James Madison led 38-21 at halftime and 52-21 after three quarters. The Dukes scored nine touchdowns and a field goal on their 10 possessions, not including those that ended each half.