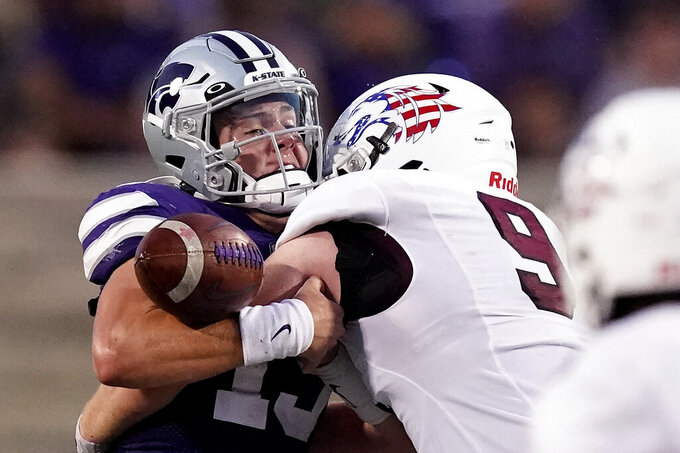 Kansas State quarterback Will Howard (15) fumbles the ball as he is sacked by Southern Illinois running back Pop Jones III (9) during the first half of an NCAA college football game, Saturday, Sept. 11, 2021, in Manhattan, Kan. (AP Photo/Charlie Riedel) 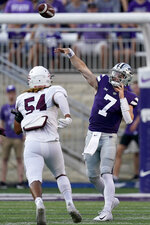 KANSAS CITY, Mo. (AP) — Just hours after Chris Klieman took a knee with his head in his hands, watching the Kansas State medical staff prod and pull on quarterback Skylar Thompson's knee, the Wildcats' coach said what just about everyone was thinking.

“Had some deja vu kind of going through my mind,” Klieman said. “I'm sick for the kid.”

Indeed, Thompson was flying high after a season-opening win over Stanford, his first time on the field since a shoulder injury early last season led him to return for a sixth season. And he was off to a good start against Southern Illinois, too, helping the Wildcats march for a quick touchdown Saturday and then to the brink of another one.

That's when Thompson, rolling to his right ahead of running back Deuce Vaughn, suddenly pulled up and crumpled to the turf. He immediately rolled over and gripped his facemask, which served to hide his sudden fear and frustration.

Kansas State's staff quickly ran onto the field and immediately began looking at his knee, which seemed to buckle in the open field. The immediate fear was obvious — torn ligaments that would likely end Thompson's sterling if hard-luck college career — and they never really abated as Thompson was helped to the medical tent on the sideline.

On Monday, Klieman said the injury may not be as severe as initially thought but that Thompson is out indefinitely.

“It was gut wrenching,” Vaughn said. “I saw him go down kind of in my peripheral vision, but I didn’t know what happened, and when I turned around and I saw him on his back kind of squirming in agony, it was pretty tough.”

Thompson eventually walked slowly to the locker room Saturday, providing the briefest bit of hope that he might return at some point this season, even though Klieman reined in the optimism in his postgame news conference.

“I can't say right now,” Klieman said. “We'll pray for the best and see what happens.”

It's a strikingly similar situation to last year, when Thompson's shoulder injury immediately pushed freshman Will Howard into a starting role. The biggest difference: Howard now has an entire season of experience behind him.

Not that it showed Saturday.

Howard appeared to be overwhelmed by the moment, going 8 of 17 for 76 yards against the Wildcats' opponent from the Football Championship Subdivision. He lost a fumble and the only TD pass he threw went to the other team when P.J. Jules took an interception 41 yards to give Southern Illinois a 23-21 lead late in the third quarter.

Taiten Winkel's field goal gave Kansas State the lead back midway through the fourth, and Howard finally found a little bit of rhythm in the final minutes to set up Vaughn's clinching third touchdown run of the game.

“It was pretty tough but I mean, we were at the same point last year, so we've kind of been through that already,” Kansas State offensive lineman Cooper Bebee said. “It just took us as an offensive line, us as a team, rallying around Will, kind of calming him down. And then from there we were fine.”

Howard and the Wildcats will need to be better than just fine the rest of the way.

They wrap up nonconference play Saturday against Nevada, which beat California on the road before last week's win over Idaho State, then begin league play at Oklahoma State. Home games against No. 3 Oklahoma and No. 14 Iowa State follow.

That doesn't give Howard a whole lot of time to find a groove again.

“Obviously heartbroken for Skylar. Me and him have developed a really close relationship over the past year or so and hope for the best for him,” Howard said. “But you have to come in and do my role as a backup. I'm happy to come in and be ready at all times. We won the game, so we're always happy that we won, but there were a lot of things that we and I need to clean up. I know that more than anybody."