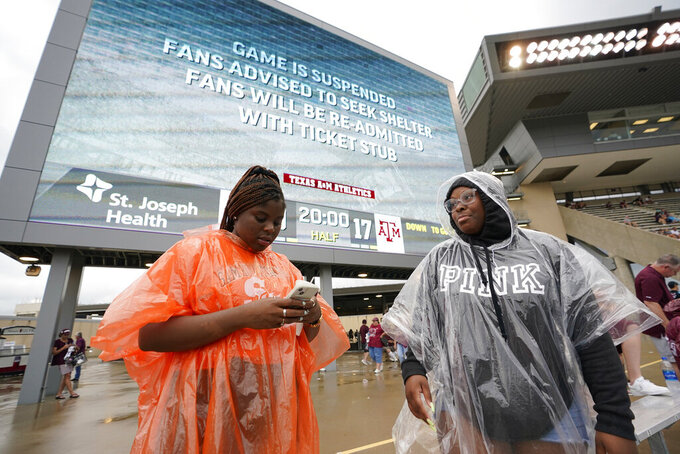 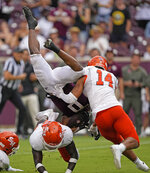 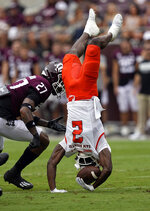 “That’s a solid performance and he can play better than that,” Fisher said. “I thought he threw accurately downfield.”

King threw for a career-high 364 yards and three long touchdowns to lead No. 6 Texas A&M to a 31-0 win over Sam Houston in a game that included an almost three-hour weather delay.

King, who was named the starter last week after beating out two others in camp, threw touchdown passes of 66, 63 and 43 yards in the opener for both teams. King also threw two interceptions in an inconsistent performance while making his return after breaking his leg in the second game last season.

Ainias Smith had six receptions for a career-high 164 yards with two touchdowns and Devon Achane ran for a score to help Texas A&M to the victory.

“On the defensive side, I felt like they played well," Smith said. “Sticking to the offensive side, we need to go ahead and execute a whole lot better.”

The sun was out when the suspension began, but heavy rain began to fall about an hour into the delay.

The rain had stopped by the time the teams returned to the field for a 20-minute warmup period before the game resumed at 3:54 p.m.

The Aggies kept it going after the long delay on the first drive of the third quarter when Achane bulled in from 1-yard out for the touchdown.

Smith said the delay helped the team refocus to close out the game on a high note.

“No disrespect to those other guys, but we were just trying to drill," he said. “We weren’t trying to play no games and that’s what it was."

The defense made a stop after that, but Kameryn Alexander hopped in front of a receiver to pick off King on A&M’s next drive. King returned to the sideline where Fisher talked to him for a minute before he returned to the bench.

The Bearkats couldn’t take advantage of the mistake and had to punt. King then capped a 10-play, 89-yard drive with a 43-yard touchdown pass to Smith to make it 31-0 with about 11 minutes remaining and end his day.

“We’ve got a long way to go,” Texas A&M coach Jimbo Fisher said. “We’ve got to get a lot better... just got to keep developing in the things we do.”

Jordan Yates, a graduate transfer from Georgia Tech, threw for 91 yards and ran for 60 in his first game for Sam Houston.

The Bearkats, who won the FCS national title in 2020, are playing their last season in the FCS as they transition to FBS next year. Sam Houston is playing an abbreviated nine-game schedule this year as it transitions and is not eligible for the FCS playoffs as the team prepares to make the jump to college football’s top division.

“I think early on we realized that we belong on the same field," Sam Houston coach K.C. Keeler said. “The problem is you’ve got to make plays, and we didn’t make enough plays."

Yulkeith Brown put the Aggies up 7-0 in the first quarter when he got in front of the defense to grab his first career reception for a 66-yard score.

The Aggies had a chance to add to the lead with about 8 ½ minutes left in the second quarter, but BJ Foster’s interception on the 3-yard line ended the drive.

Texas A&M made it 10-0 on a 40-yard field goal by Caden Davis about five minutes before halftime.

King connected with Smith on a 63-yard catch and run for a touchdown to make it 17-0 with less than a minute left in the second.

Sam Houston: Though the Bearkats struggled against A&M Saturday, they did make some big plays and put up a fight against what is expected to be one of the nation's best teams. They should continue to be one of the top teams in the FCS in their last season in the division.

Texas A&M: The Aggies will need to limit mistakes and play more consistently if they hope to compete with the elite teams in the SEC.

Johnny Manziel, who won the Heisman in his record-setting freshman year at A&M in 2012, and fellow former Aggies standout Mike Evans, who now plays for Tampa Bay, were among the 97,946 fans at Saturday's game.

The Aggies should retain their spot in the AP Top 25 after the win.

Texas A&M: Hosts Appalachian State next Saturday after the Mountaineers lost a 63-61 thriller to North Carolina this week.