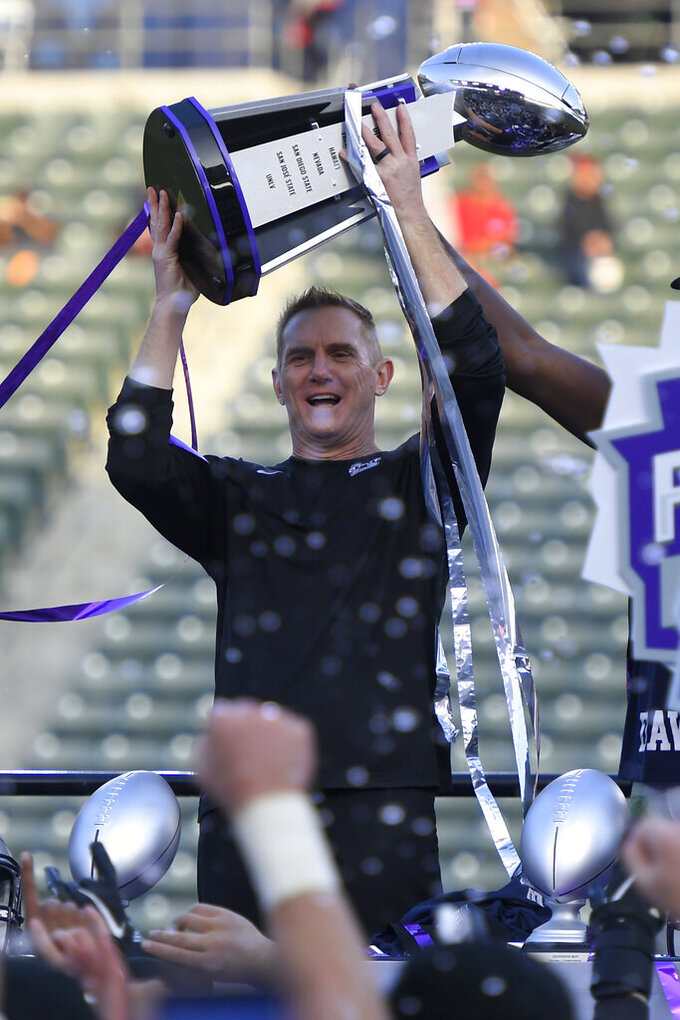 INGLEWOOD, Calif. (AP) — The inaugural LA Bowl will be headlined by Jimmy Kimmel, features a vomiting camel — “Jimmy Camel” — as a mascot and an official sandwich to keep the fans entertained.

It also includes two evenly matched teams on the field as Oregon State takes on Utah State on Saturday.

The Beavers (7-5) are making their first bowl appearance since 2013 as coach Jonathan Smith directed his alma mater to a winning record for the first time in his four-year tenure. Oregon State is 1-5 away from Corvallis, but that lone win came in the Los Angeles area when it defeated Southern California.

The Aggies (10-3) routed San Diego State 46-13 on Dec. 4 for their first Mountain West Conference championship. First-year coach Blake Anderson, who spent seven seasons at Arkansas State, quickly turned things around at Utah State as it became only the fourth team in FBS history to go from zero or one win to at least 10 victories the following season.

The star of the bowl though is Kimmel, who said “ever since I was 52, which was last year, I have dreamed of having a college bowl game named after me.”

Doug DeLuca, the co-executive producer “Jimmy Kimmel Live!” said it originally came up as a wild idea a couple years ago, but didn't really come to fruition until the LA Bowl became reality. Kimmel attended both UNLV and Arizona State, so the idea of somehow pairing up with a game matching the Pac-12 and Mountain West conferences seemed like a natural.

“They sort of cocked their head sideways. At first they’re like, ‘you know, a bowl game that named after a person.’ But then they started thinking about it and warmed to the idea very quickly,” he said.

LA Bowl executive director Jason Gannon said it has been a unique opportunity to embrace entertainment and sports. The game was originally scheduled to begin last year, but was one of many cancelled due to the COVID-19 pandemic.

Both teams were in the audience and were part of skits on “Jimmy Kimmel Live!” this week. Kimmel has also said that he will be operating one of the T-shirt cannons.

“You look at this opportunity there is nothing else like this right now. To have Jimmy come in, embrace it and bring it to life on a nightly basis has been great,” Gannon said.

BATTLE OF THE BACKS

Oregon State's offense is led by running back B.J. Baylor, who led the Pac-12 Conference with 1,259 rushing yards. He is the first Beavers player to lead the conference in rushing since Steven Jackson in 2003.

The Beavers though will be going up against a Utah State defense that averaged 7.9 tackles for loss per game, which is fourth in the Football Bowl Subdivision.

Utah State's running back will be familiar to Oregon State players and fans. Calvin Tyler Jr. transferred after four seasons with the Beavers and ran for 764 yards, including three 100-yard games.

Bonner's favorite target is Deven Thompkins, who has a school-record 1,589 receiving yards and six 100-yard games.

The Mountain West went 5-5 against the Pac-12 this season. Utah State defeated Washington State early in the season but Oregon State won at Hawaii.

Anderson said there is a chip on some of his player's shoulders because not many were recruited by Pac-12 programs.

“That just immediately puts a chip on anybody. So you didn’t think I was good enough coming out. I’m going to show you,” he said. “It's an opportunity for guys to show we do belong at that level and we feel that way as a program. Clearly we have held our own very well this year."

An advantage for both teams is they haven't had a lot of downtime since concluding their regular seasons a couple weeks ago. The disadvantage though is that bowl preparations have come in the midst of finals and the early signing period.

“The later the bowl game is, you can get more practices and time to develop players on your roster where you don't have that the earlier it is,” Smith said. “But at the end of the day we're excited to be here whenever it is going to be played.”