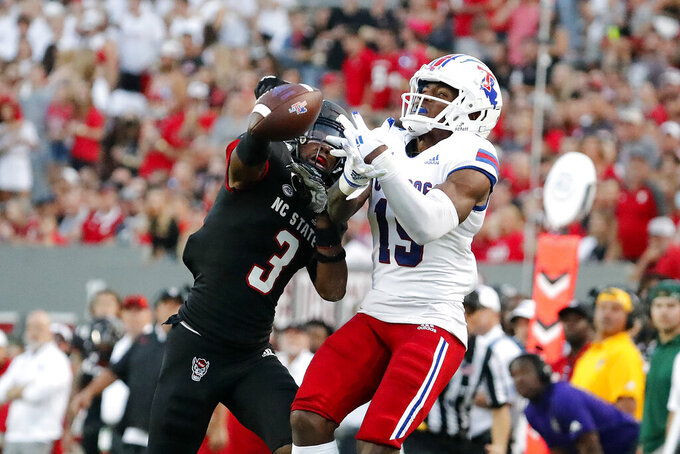 North Carolina State's Aydan White (3) breaks up a pass intended for Louisiana Tech's Bub Means (15) but is called for interference during the first half of an NCAA college football game in Raleigh, N.C., Saturday, Oct. 2, 2021. (AP Photo/Karl B DeBlaker)

RALEIGH, N.C. (AP) — Beating Clemson was tough enough for North Carolina State. Getting refocused for a nonconference game a week later was another challenge.

The No. 23 Wolfpack did it just well enough. Devin Leary threw for two touchdowns and N.C. State held off Louisiana Tech 34-27 on Saturday night.

Louisiana Tech picked up five first downs on its last possession, reaching the N.C. State 22-yard line before Jakeen Harris’ interception in the end zone on the game’s final play.

“We did enough to win,” Doeren said. “It’s great, I guess, to not play great and to win a football game.”

N.C. State built on the upset of Clemson and improved to 4-1 for the second year in a row.

“You could tell our energy wasn’t there at the beginning of the game,” running back Ricky Person Jr. said. “As it went on, we started to come together as a whole unit and push forward.”

“There’s not a moral victory in being close,” Louisiana Tech coach Skip Holtz said. “We came here to win.”

Louisiana Tech had two fourth-quarter touchdown drives of 65 or more yards. Then the Bulldogs moved 67 yards on the last drive.

“We probably shouldn’t have been in that moment,” N.C. State linebacker Isaiah Moore said. “We didn’t play well on the defensive side of the ball in the second half.”

Kendall struck again when Griffin Herbert plowed into the end zone to complete a 14-yard pass play as Louisiana Tech made it 34-27 with 4:43 to play.

N.C. State’s Christopher Dunn was 2 for 2 on field goals as he was good from 36 and 29 yards in the first half. This came a week after he missed all three attempts, including a would-be game winner from 39 yards on the last play of regulation in the Clemson game.

Louisiana Tech: The Bulldogs’ first two losses of the season came by a combined three points and they were in another close defeat this time. Louisiana Tech is 4-48 all-time against Top 25 opponents.

N.C. State: The Wolfpack moved to 4-0 in home games this year, but the last two victories have come down to needing a defensive stop on the final play. Last week, it was a double-overtime upset of Clemson.

Person and Knight are shaping up as a stellar combination in the N.C. State backfield.

“It’s great having (Knight) alongside me, just with the work that he’s put in,” Person said. “He’s a great, great back. I love that man.”

Louisiana Tech had to use backup quarterback Aaron Allen for a play in the final minute after Kendall was shaken up at the end of a fourth-down scramble for a first down. A snag developed for the Bulldogs when the ball was blown into play and it took about 20 seconds before the ball was snapped.

“He didn’t realize the play clock was running,” Holtz said. “Then we had very little time left after that.”

Because of that, the Bulldogs had time for just two more plays.

The Wolfpack will have a steady diet of Atlantic Coast Conference games for the rest of the regular season. But N.C. State has a weekend off before its next game.

“We need a bye right now,” Doeren said. “We’re definitely ready for one, physically and mentally.”

N.C. State is likely to hold steady, especially until it wins a road game and it will have two such assignments later this month.