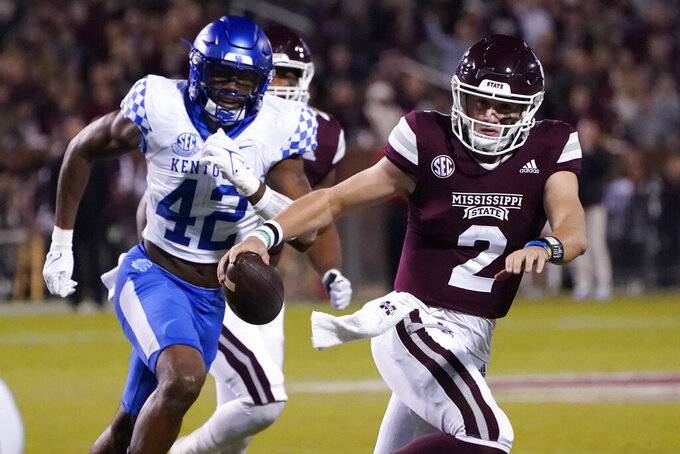 STARKVILLE, Miss. (AP) — Mississippi State quarterback Will Rogers could do no wrong Saturday night, setting an Southeastern Conference record for completion percentage to help the Bulldogs steamroll their way to another big victory.

The sophomore quarterback completed 92% of his passes — 36 of 39 — which is an SEC record for any game with 30-plus attempts.

Dillon Johnson ran for two touchdowns and Mississippi State scored 14 points off of four Kentucky turnovers to beat the No. 12 Wildcats 31-17 on Saturday night.

The Bulldogs (5-3, 3-2) came up big with three interceptions of Will Levis and a fumble recovery. They turned a third-quarter fumble and pickoff into consecutive touchdowns to put the game out of reach.

“I thought it was huge,” Mississippi State coach Mike Leach said. “Kentucky is really about control … maintaining control is something we’ve struggled with this year, so those obviously helped.”

Johnson had scoring runs of 9 and 1 yards and finished with 41 yards rushing on 11 carries. Jo’Quavious Marks rushed for 58 yards and a score.

“We didn’t match the intensity. I felt like we got pushed around,” Kentucky coach Mark Stoops said. “We were not able to run the ball. They ran the ball. They made competitive plays, approached, outcoached us, outplayed us in every area. So overall, just a very deflation defeat.”

Kentucky: Josh Ali got the Wildcats started by returning a punt 75 yards for a touchdown, but it soon went downhill from there with self-inflicted wounds. Worse, the turnovers gave the Bulldogs a short field for them and they couldn’t cover either the pass or the run. Not the way they expected to come out of a bye.

Mississippi State: The Air Raid offense had a lot of ground-and-pound elements, and the Bulldogs posted just their second game this season with multiple rushing touchdowns. The Bulldogs have shown they can beat talented teams, as long as they play clean.

Kentucky will fall several spots and possibly out of the rankings following its second consecutive loss.

Mississippi State: At Arkansas on Nov. 6.