Mullen, No. 6 Florida can clinch SEC East title at Tennessee 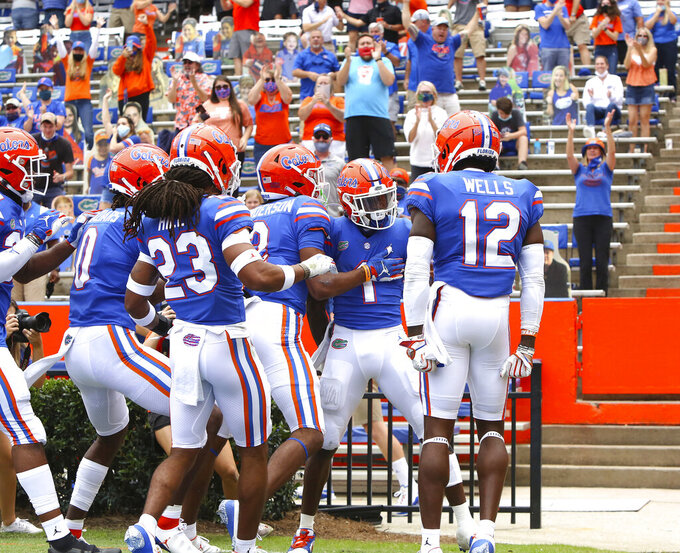 Florida players celebrate with teammate Kadarius Toney (1) who scored a touchdown on a punt return during an NCAA college football game against Kentucky in Gainesville, Fla. Nov. 28, 2020. (Brad McClenny/The Gainesville Sun via AP)

In his third season at Florida coach Dan Mullen has the Gators a win away from the Southeastern Conference championship game for the first time since 2016.

Sixth-ranked Florida can clinch the East by beating Tennessee on Saturday, something they've done 14 of the last 15 games in this series.

“This is the game to clinch the East, this is the game to assert our dominance and tell everybody we’re going to the SEC championship, and yeah, I think everybody’s pretty excited,” Florida linebacker James Houston said. "I don’t think too many people need motivation for this game. We all know what’s at stake.”

Mullen has Florida (7-1, No. 6 CFP) clicking with five straight victories and one of the nation's best offenses led by a Heisman Trophy favorite in Kyle Trask.

The quarterback was a freshman the last time Florida played for the SEC title, and winning the SEC East has been these Gators' first of many goals this season.

“We have a chance to do that on Saturday,” Trask said. "We’ll definitely be playing at our top level to get that done. It will mean everything to get back to Atlanta. I remember it just like it was yesterday, my freshman year we went in 2016. It goes by so fast. It would be cool to be back there and hopefully get a win.”

The Gators (7-1, No. 6 CFP) have been nearly impossible to stop, beating Kentucky 34-10 last week. As impressive as the performance was, it snapped a school-record streak of nine straight games scoring at least 35 points.

“The biggest emphasis on us is finding ways that we’ve got to improve as a team,” said Mullen who never won a division title coaching at Mississippi State.

While Florida is focused on fine-tuning, Tennessee (2-5) is just glad to play after COVID issues postponed their Nov. 16 game against Texas A&M and last week's game with Vanderbilt was postponed by the SEC.

The Vols also have lost five straight, the longest skid since the 1988 team lost its first six to open that season. They haven't played since Nov. 21 when they lost 30-17 at No. 23 Auburn, and this skid has fans questioning whether Jeremy Pruitt is the right coach for the program in just his third season.

“We just want to go out here and flip the script, we want to get this train back on the tracks,” Tennessee running back Eric Gray said.

TRASK AND THE HEISMAN

The Florida quarterback has thrown his way into the Heisman Trophy conversation with 34 touchdown passes. That's best in the country and tied David Klinger of Houston in 1990 and Dennis Shaw of San Diego State in 1969 for the third-highest total through eight games in FBS history. Trask is second nationally with 351.3 yards passing per game and fifth in passer rating.

The Volunteers have been dealing with their biggest COVID-19 issues since fall practice. Pruitt said a couple tested positive when they came back from Auburn, and contact tracing took out “a lot” of players. Pruitt said they had a couple more positives Tuesday, involving one player.

A quarterback is among those affected, though Pruitt declined to identify who. Pruitt isn't saying who will start against Florida.

“We'll make the decision as we get closer to the game,” Pruitt said.

Pitts has 29 receptions for 513 yards and 11 touchdowns in 5 ½ games this season. He missed 10 quarters because of a concussion and a broken nose sustained during a vicious hit against Georgia last month. In Pitts’ absence, backups Kemore Gamble and Keon Zipperer combined to catch 10 passes for 203 yards and five touchdowns.

Florida’s tight ends now have 43 catches for 755 yards and 16 scores in eight games, more production from the position than anyone in the country.

The Gators have scored on their opening possession in seven of eight games this season. Six touchdowns and a field goal, to be exact. They have first-drive TDs in each of their last three games, a streak they hope to continue in Knoxville.