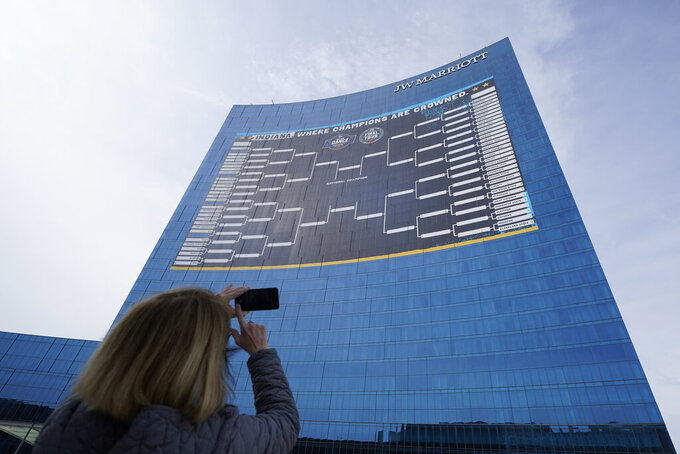 Lisa Moeller takes a photo of the NCAA bracket for the NCAA college basketball tournament on the side of the JW Marriott in downtown Indianapolis. Wednesday, March 17, 2021. (AP Photo/Darron Cummings)

INDIANAPOLIS (AP) — A social media effort to raise awareness about inequities in college sports by some prominent basketball players came with calls for rules changes and requests for meetings with the NCAA president and lawmakers.

The players who got #NotNCAAProperty trending on social made no threats of protests at tournament games, which started Thursday night and will have millions of viewers all weekend.

Following a year of activism in sports that included NBA players shutting down the playoffs after a police shooting, it seems fitting that college athletes would use March Madness to get a message across.

NCAA vice president of basketball Dan Gavitt, who communicates frequently with coaches, said Thursday he was not aware of any plans for player protests that could interfere with tournament games being played.

“Am I concerned? I would be concerned about any potential disruption, I guess, of games,” Gavitt said. “I'm certainly not at all concerned and, and quite frankly, supportive of student-athletes using their voices for advocacy in issues that they are very passionate about. We have certainly seen that throughout 2020 in particular.”

Using the #NotNCAAProperty hashtag on Twitter, players pushed for the NCAA to change its rules banning college athletes from earning money for things like endorsements, sponsorship deals and personal appearances, all encompassing revenue tied to their name, image or likeness (NIL).

Three prominent Big Ten players — Isaiah Livers of Michigan, Geo Baker of Rutgers and Jordan Bohannon of Iowa — led the way, and players from at least 15 tournament teams jumped on board with tweets of support.

The National College Players Association, a college athlete advocacy group, released a statement late Wednesday that detailed the players' goals. They included meetings with NCAA President Mark Emmert and the opportunity to meet with state and local lawmakers who are working on passing laws that could set parameters for the association's NIL rules.

“President Emmert regularly meets with student-athletes to discuss matters that impact them and their lives. While there have been limited opportunities over the past year due to the pandemic, he has met virtually when possible,” NCAA spokesman Bob Williams said in a statement to the AP. “He would be happy to connect either virtually or in person when appropriate with any student-athletes who want to engage.”

The NCAA has been working toward changing its rules governing NIL compensation to pull back most restrictions. But those efforts have bogged down under scrutiny from the Justice Department and with an antitrust case involving the NCAA heading to the Supreme Court later this month.

Meanwhile, at the women's basketball tournament in San Antonio, those players were forcing the NCAA to deal with a different kind of equity issue. A social media post from a member of Stanford's sports performance staff showed the weight training areas for the women were severely lacking compared to what the men have in Indianapolis.

The men's players were back to Twitter on Thursday, circulating the #NotNCAAProperty hashtag again and what they hoped to accomplish.

There were no specific plans about what was next.

“The players are driving this so I’m not going to speak on their behalf,” said NCPA executive director Ramogi Huma, a former UCLA football player.

Bohannon, Livers and Baker spoke to The Athletic on Thursday and said they were hoping to build the movement during their time in Indianapolis.

“The good part about this tournament is it’s over multiple weeks,” Baker told The Athletic. “So there’s time to come up with something.”

Bohannon told The Athletic: "Maybe it’s protesting a game or delaying a game — because it would be a nightmare for NCAA. I know they don’t want that.

“Right now, we certainly have the leverage to do that.”

The real madness starts Friday in Indianapolis, with 16 games going from noon to midnight, and then another 16 on Saturday to wrap up the first round.

Because of the pandemic, the entire tournament is being staged in Indiana. All 68 teams are being hosted in what the NCAA is calling a “controlled environment,” just blocks away from the association's home office.

Last year, college football players from the Pac-12 threatened boycotts over concerns about COVID-19 protocols, social justice issues and economic rights for college athletes. The Big Ten had its own #WeAreUnited movement related to health and safety protocols.

Players also led the push to play after the Big Ten and Pac-12 conferences canceled fall football seasons, only to reverse course and play. College athletes across the country were not only notable participants in Black Lives Matter demonstrations, but in some cases organized and led marches.

Attorney Tim Nevius, a former NCAA investigator, said college athletes are increasingly aware of their power to effect change. Especially when they organize.

“No matter how big or small something like this is, it gets the NCAA's attention,” Nevius said.

Whether the latest social media campaign could lead to something bigger like a strike or walkout by players during one of the biggest events on the American sports calendar, Nevius could not predict.

“These are warning shots,” he said, “until they’re not.”