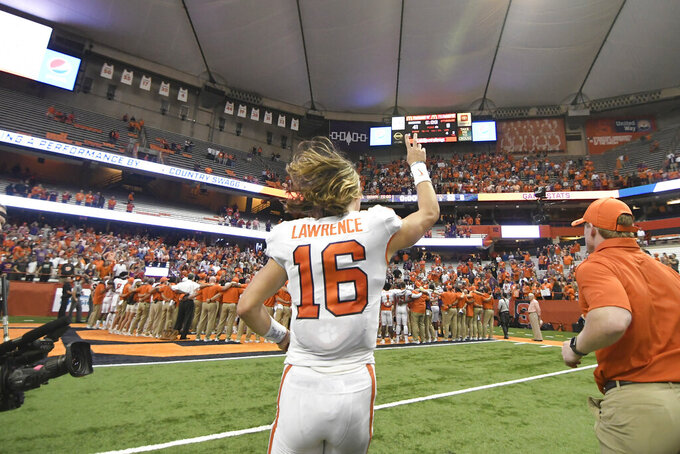 The biggest win in Charlotte's seven seasons since reviving football in 2013. The 49ers moved from the FCS to FBS in 2015 as part of Conference USA. Clemson is seeking to extend its program record to 19 straight wins and keep its try at a second consecutive national championship at stake.

Charlotte QB Chris Reynolds against Clemson's pass defense. Reynolds passed for 155 yards and two touchdowns in a 52-17 win over UMass last week. The Tigers had eight sacks and limited Syracuse to 172 yards passing in a 41-6 win at the Carrier Dome last week. Clemson defensive coordinator Brent Venables said his young lineup is gaining confidence with each game. That's bad news for the 49ers.

Clemson: LB Isaiah Simmons, a junior, had become the face of a Tigers defense that lost seven starters off the national championship team. Simmons leads the team in tackles, sacks, tackles for loss and quarterback pressures.

These teams have never played, although the 49ers lost to the Clemson "B'' team during the program's first season in 1946. Charlotte stopped the program in 1948. ... Charlotte will get $1 million for playing at Clemson. ... Clemson has won 17 straight games at home and 38 of their last 39 at Memorial Stadium. The lone loss in that stretch was a 43-42 defeat to Pitt in 2016. .. Charlotte is playing its second ACC team since restarting football in 2013. The 49ers lost to Louisville 70-16 in the 2016 opener. ... Clemson has won 20 consecutive non-conference games. In fact, no one on the Tigers roster has lost a game to a nonconference opponent. ... Clemson QB Trevor Lawrence has five interceptions this season after throwing just four all of last season.