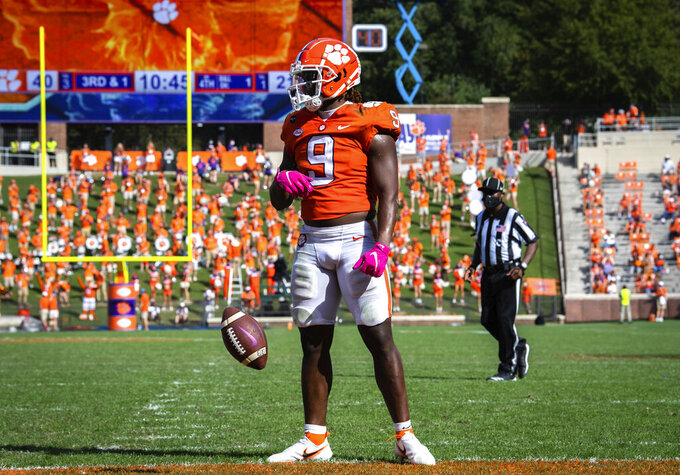 FILE - In this Oct. 24, 2020, file photo, Clemson running back Travis Etienne (9) spins the ball out of his hands after scoring a touchdown during an NCAA college football game against Syracuse in Clemson, S.C. The defense for No. 4 Notre Dame has been solid all season during a 6-0 start. It is about to face its biggest challenge. The Fighting Irish will host top-ranked Clemson on Saturday. The Tigers will be without star quarterback Trevor Lawrence. The Tigers have top running back Travis Etienne. (Ken Ruinard/Pool Photo via AP, File)

In what could be the first of several meetings between the two this season, the winner puts itself in the driver’s seat for a berth in the ACC title game and the College Football Playoff.

Clemson: RB Travis Etienne. The senior, whose 62-yard TD run closed out Clemson’s 30-3 victory over the Irish in 2018 CFP Cotton Bowl semifinal, is the ACC’s all-time leading rusher with 4,644 yards and has become more of a dual-threat this season with 606 yards rushing and 424 receiving yards.

Notre Dame: QB Ian Book. The fifth-year senior is 26-3 as a starter. He has thrown for 511 yards and three touchdowns in road victories over Pittsburgh and Georgia Tech the last two weeks. He has thrown 129 consecutive passes without an interception.

This is sixth matchup of AP top-5 teams in ACC history. The lower ranked team has won four. ... The only Irish victory in the series, 21-17, came at Clemson during their 1977 national championship season. … Notre Dame’s 12-game winning streak is the longest in the FBS. … The Irish’s 22-game home winning streak is tied for second among active streaks behind Clemson’s 27. … The Tigers have won 39 straight non-bowl games and are 20-1 in November games since 2015. … Saturday’s game is Clemson coach Dabo Swinney’s 100th ACC regular-season game (83-16). … Notre Dame coach Brian Kelly is seeking his 99th coaching victory at Notre Dame; only Knute Rockne (105) and Lou Holtz (100) have more. ... No. 1 teams are 5-2 at Notre Dame. The last time was 2005 against USC, the “Bush Push” game. The last Irish victory was against Florida State in 1993.