No. 1 LSU could be missing top rusher against No. 4 Sooners 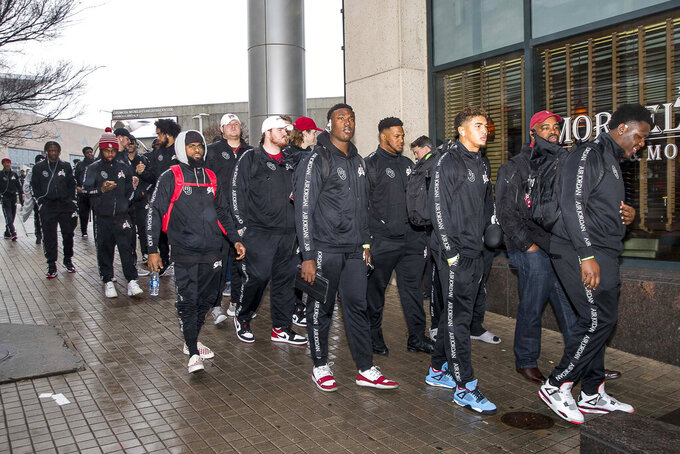 The Oklahoma Sooners football team arrived at the Omni Hotel in Atlanta, Monday, Dec. 23, 2019. The Oklahoma Sooners will face the LSU Tigers in the Chick-fil-a A Peach Bowl at Mercedes-Benz Stadium Saturday, December 28. (Alyssa Pointer/Atlanta Journal-Constitution via AP)

The Sooners, meanwhile, will be missing starting defensive end Ronnie Perkins and two backups due to suspensions.

Edwards-Helaire suffered a hamstring injury in practice last week. He was only an observer for LSU's first practice in Atlanta on Monday. He leads the undefeated Tigers (13-0) with 1,290 yards rushing and 16 touchdowns.

LSU coach Ed Orgeron says Edwards-Helaire is “a little bit better" and he described the running back's status as day to day.

“We're going to see if he can do something tomorrow," Orgeron said.

Based on Orgeron's comments, it would be a surprise if Edwards-Helaire plays. The coach spoke of the junior first-team All-SEC player in the past tense when comparing his running backs, including freshman backups Tyrion Davis-Price and John Emery.

“I think all three of those guys do different things," Orgeron said. “With Clyde, he did everything well. He blocked well. He ran inside, he ran outside and caught the football. We'll have to adjust if Clyde doesn't play to rotate those guys and do what they do best.”

Quarterback Joe Burrow was second on the team with 289 yards rushing. Davis-Price ran for 270 yards with six touchdowns and could be the leader of a running back committee if Edwards-Helaire can't play.

Center Lloyd Cushenberry III said he's confident LSU's coaches will “get those guys right. I know Clyde is going to be in their ear, trying to get them prepared, and whoever gets carries, it's on us up front to do our job so they can make plays. ... We've got to take care of those guys and get the job done."

The Sooners (12-1) also will be limited. Coach Lincoln Riley confirmed three Oklahoma players, including Perkins, will be suspended for the game. Perkins leads the team with six sacks.

“We're not a one-man show up front,” Riley said. “I'm confident in the guys that we have and the pressure we've been able to force this year, and hopefully we can do it again.”

Running back Rhamondre Stevenson and wide receiver Trejan Bridges, who are backups, also will miss the game.

Stevenson had a touchdown run in Oklahoma's 30-23 overtime win over Baylor in the Big 12 championship game.

Riley said he wouldn't detail “dirty laundry” about the cause of the suspensions. He said the three players traveled with the team and will join practices in Atlanta.

“I wanted those guys here,” Riley said. “They're able to practice and able to help this team win in a different way right now. ... They give us great preparation on both sides of the ball."