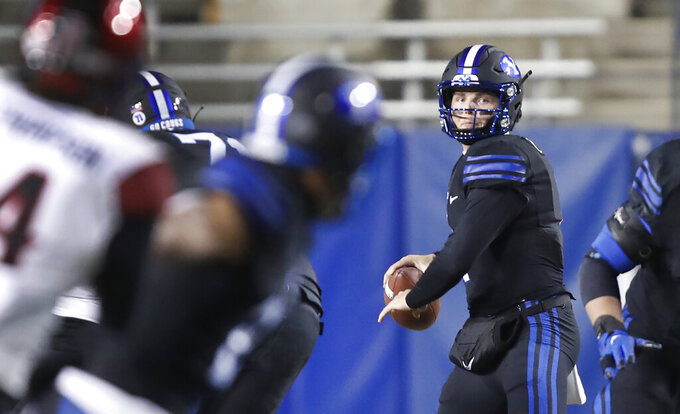 BYU: QB Zach Wilson, 3,267 yards passing with 30 touchdowns and three interceptions along with eight rushing scores. The passing yardage ranks fifth in the Bowl Subdivision ranks while the 30 passing TDs are tied for third.

UCF: QB Dillon Gabriel, 3,353 yards passing with 30 touchdowns and four interceptions. The passing yardage ranks third in the FBS ranks while the 30 passing TDs are tied for third.

BYU: The Cougars won their first nine games before losing 22-17 at now-No. 9 Coastal Carolina on Dec. 5, with that game being a late addition to the schedule after a coronavirus-related postponement of Coastal Carolina's game against No. 23 Liberty. They followed that by beating San Diego State a week later to secure the program's first 10-win season since 2011, which marked the Cougars' first season as an independent.

UCF: UCF started 2-0 and spent the first four weeks of this season in the AP Top 25, peaking at No. 11 in late September before falling out of the poll. The Knights, who had won 35 games over the previous three seasons, own the FBS ranks' No. 2-ranked total offense (585.6 yards per game) and No. 5 scoring offense (44.3).

BYU: This marks BYU's 38th bowl game, starting with the 1974 Fiesta Bowl. BYU is 15-21-1 in bowl games overall, losing to Hawaii in last season's Hawaii Bowl. The Cougars have lost four of six bowl games since a run of six wins in seven trips from 2006-12.

UCF: This marks the Knights' fifth straight bowl appearance, a program record. That run included an appearance in the Peach Bowl for the 2017 season and the Fiesta Bowl for the 2018 season. A win would improve UCF to 6-6 overall in bowl games.