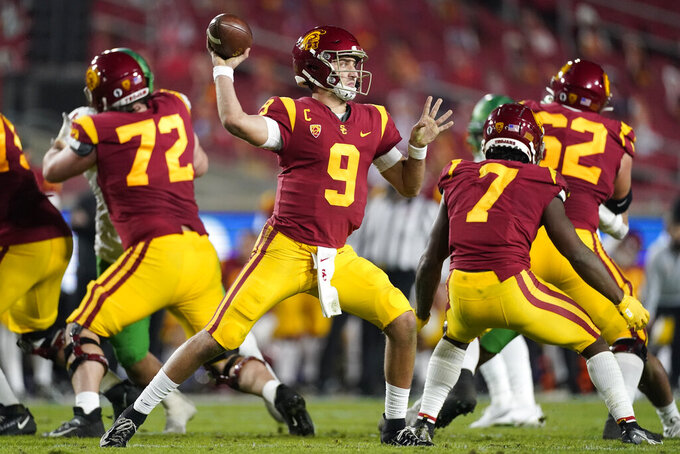 The Trojans will open a critical season for perpetually embattled coach Clay Helton with a tricky visit from the defending Mountain West Conference champions. USC is expected to challenge for the Pac-12 title and could be a potential College Football Playoff contender behind the dynamic quarterback-receiver tandem of Kedon Slovis and Drake London, but improved play on both lines of scrimmage will be needed for the Trojans to reach their full potential. Coming off a 45-14 win over Southern Utah, the Spartans would have real New Year’s Six bowl aspirations if they can pull off the upset.

USC’s offensive tackles against San Jose State defensive end Cade Hall. Despite the presence of New York Jets first-round draft pick Alijah Vera-Tucker, the Trojans struggled up front last season. New offensive line coach Clay McGuire is tasked with turning around a group that ranked 10th in the conference in sacks allowed (2.5) and last in rushing yards per carry (3.17). Redshirt freshmen Courtland Ford and Jonah Monheim are expected to start at left and right tackle, but they will face a stiff challenge from the 2020 Mountain West defensive player of the year. Hall had 10 sacks in seven games last season, the only FBS player to reach double-digit sacks in fewer than 10 games.

San Jose State: QB Nick Starkel got off to a quick start with 394 yards passing and four touchdowns against Southern Utah. His only blemish was throwing an interception that was returned for a touchdown.

USC: Slovis threw for 320.2 yards per game last season and led fourth-quarter comebacks against Arizona State, Arizona and UCLA. However, a lack of consistency troubled him throughout the abbreviated season. With the departure of experienced receivers Amon-Ra St. Brown and Tyler Vaughns, Slovis will have to be sharper in his third season as the starter.

USC is 34-1-1 against Mountain West teams. The lone loss came in the 1992 Freedom Bowl against Fresno State. … San Jose State has lost 14 straight games against Pac-12 opposition, with the last win came in 2006 against Stanford. … Slovis has thrown 21 touchdowns against eight interceptions in nine career home games. … WR Charles Ross had three receptions for 77 yards and a touchdown in his San Jose State debut. Ross had four catches for 37 yards as a redshirt freshman at Nevada last season.