No. 16 Coastal Carolina looks for win vs Louisiana Monroe 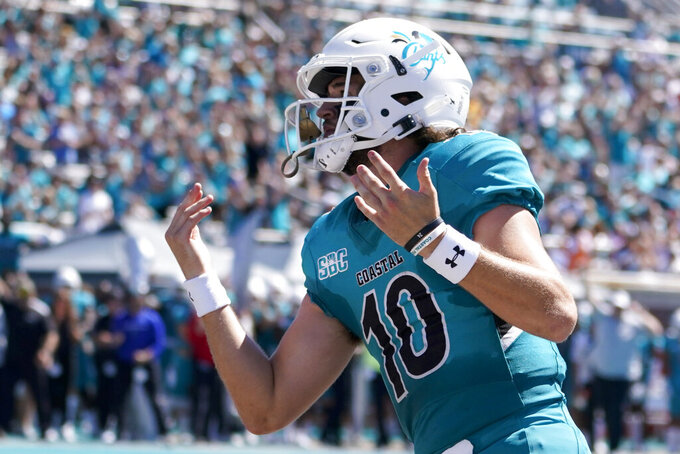 Coastal Carolina right tackle Steven Bedosky has seen almost everything change in his six seasons with the 16th-ranked Chanticleers.

He and his teammates looking for one more change this week with the Chants try for their first league win over Louisiana Monroe (2-1, 1-0 Sun Belt Conference) on Saturday.

The Chanticleers (4-0) are 0-3 vs. the Warhawks since joining the Sun Belt in 2017. It's the only conference team Coastal Carolina hasn't defeated in its rise from league bottom-dweller to East Division champion.

Bedosky remembers all too well when nobody in the Sun Belt thought much about playing Coastal Carolina other than getting another victory. The Chants went 6-18 in the Sun Belt their first three seasons. Things changed last year as the Chants started 11-0, 8-0 in the Sun Belt, on the way to winning their division. COVID-19 canceled the Sun Belt title game with Louisiana Lafayette.

But Coastal has continued the winning in 2021.

“We had to step up,” said Bedosky. “We took that chip on our shoulder, we knew everybody would be coming for us and we had to show we're still Coastal Carolina.”

Louisiana Monroe is hoping to reset its course under first-year coach Terry Bowden, who formerly coached at Auburn and Akron.

The Warhawks opened Sun Belt play with a 29-16 victory over Troy last week. Bowden said how they handle success this week will tell if the Troy win was a breakthrough moment for his new program.

“I hope that it is, but that's going to depend on how we respond not just to losses, but to wins,” Bowden said.

Some other things watch for when Louisiana Monroe plays Coastal Carolina:

Coastal Carolina has been one of the most efficient and effective offenses in the country. The Chants are fourth nationall in scoring at 45.5 points a game and 12th in the country with 520 yards a game. Quarterback Grayson McCall leads the FBS in completion percentage (76.6) and passing efficiency.

Coastal Carolina coach Jamey Chadwell is happy to face ULM's Bowden, knowing how much that family, led by late Florida State national championship coach Bobby Bowden, has meant to college football. “His legacy is long lasting and he's left an imprint on a lot of different coaches and players,” Chadwell said.

Coastal Carolina has become known for its wild, post-game celebrations (available on YouTube). Bowden and Warhawks got into some celebratory, locker room dancing after beating Troy. The 65-year-old Bowden showed off some, uh, moves, as well. “If I expect my players to win, they expect me to dance,” Bowden explained.

Coastal Carolina linebacker Enock Makonzo grew up in LaChine, Quebec and speaks French. The fifth-year senior was asked this week if he ever used his native tongue to say something he didn't want defensive coordinator Chad Staggs to understand. “I never did, but that's good input,” he laughed. “I might start doing that.”

L ouisiana Monroe quarterback Rhett Rodriguez was released from the hospital as he recovers from a collapsed lung discovered after he played against Troy. Rodriguez's father, Warhawks offensive coordinator Rich Rodriguez. told ESPN that his son made “an amazing recovery” after being on a ventilator in the hospital's intensive care unit.