No. 16 Mississippi St., No. 22 Kentucky meet in SEC showdown 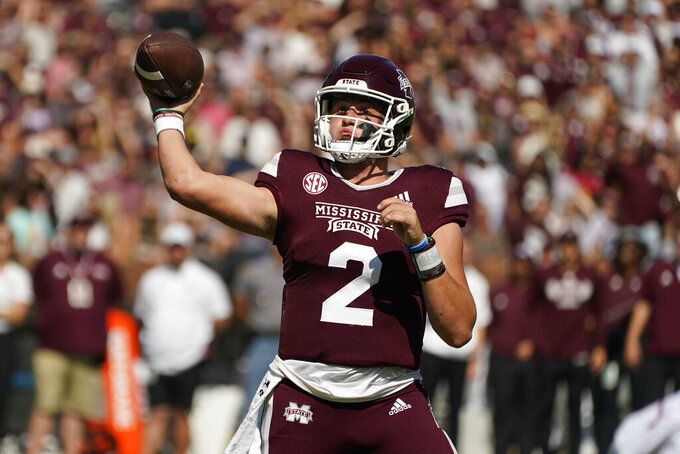 Line: Mississippi State by 4 1/2 according to FanDuel.com Sportsbook.

Mississippi State has outscored opponents 127-55 during its three-game winning streak, its longest under coach Mike Leach, and seeks to enter SEC West contention. Kentucky has dropped two straight and hopes QB Will Levis returns from a left foot injury that kept him out of Saturday’s 24-14 home loss to South Carolina.

Mississippi State QB Will Rogers vs. Kentucky pass defense. The SEC’s top passer (2,110 yards, 22 TDs) has thrown for 1,133 yards and 12 touchdowns the past three games, including 395 with three TDs in a 40-17 victory over Arkansas. He became the conference’s career leader with 946 completions and is one TD shy of tying Dak Prescott’s school record of 70 passing TDs. Kentucky counters with the SEC’s No. 3 pass defense (174.2 yards allowed per game) and third-ranked unit overall (307.2).

Mississippi State: LB Jett Johnson has a team-high 57 tackles that rank fourth in the SEC. He had 11 stops last week against Arkansas and recorded a career-best 13 in the opener against Memphis. Johnson’s totals include 2.5 tackles for loss, three quarterback hurries and a pass breakup. He recovered a fumble in last year’s win over Kentucky in Starkville.

Kentucky: RB Chris Rodriguez Jr. rushed 22 times for 126 yards against South Carolina in his second game back from suspension and moved into fifth place on the school’s career list with 2,938.

MSU is off to its best start since going 6-0 in 2014 on the way to a No. 1 ranking. ... Dillon Johnson last week became the first Bulldog to rush for 100 yards under Leach. His 402 yards rank eighth among SEC rushers. ... Caleb Ducking ranks second in the SEC with seven receiving TDs. ... Kentucky’s 25 sacks allowed ranks 129th out of 131 FBS schools. ... LB DeAndre Square needs 15 tackles to become the 20th Wildcat with 300 in his career. Jacquez Jones, who missed the South Carolina game with an injury, needs one.