No. 16 Mississippi State aims to stay hot vs No. 22 Kentucky 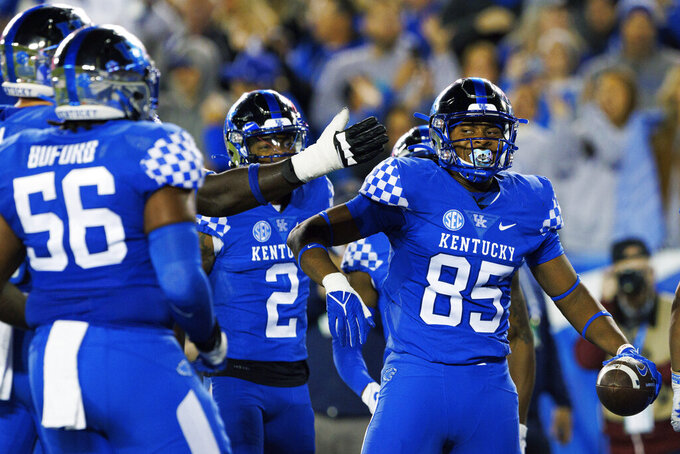 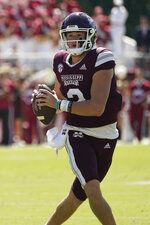 LEXINGTON, Ky. (AP) — Mississippi State is playing its best football under Mike Leach with three consecutive lopsided victories sparked by strong play on both sides of the ball.

The No. 16 Bulldogs now aim to prove they can do it on the road Saturday night at No. 22 Kentucky, which hopes to be whole again and halt a two-game slide.

Mississippi State (5-1, 2-1 SEC) has rebounded impressively from last month’s 31-16 loss at LSU after leading 13-0. Not only have the Bulldogs outscored Bowling Green, Texas A&M and Arkansas by a combined 127-55, the Air Raid offense and 3-3-5 defense have contributed their share of big plays after being unranked just three weeks ago.

“We’re playing faster than we did last year, though we can certainly play faster,” the third-year coach said. "And then defensively, we do a lot of good things and are kind of explosive and powerful. But there’s some of the big plays we can definitely shut down, too.”

MSU faces a Kentucky squad (4-2, 1-2) suddenly struggling and unsure if quarterback Will Levis will return from a left foot injury that kept him out of last week’s 24-14 home loss to South Carolina. The SEC's No. 4 passer is being evaluated daily.

Freshman Kaiya Sheron started last week and was solid at times, but coach Mark Stoops lamented not providing enough around him to be successful. The SEC’s No. 3 defense (307.2 yards per game) forced two turnovers but was otherwise flat in yielding a 42-yard touchdown pass and a 24-yard scoring run to the Gamecocks.

“I guess I can talk about until I’m blue in the face, but I think they better do something about it,” Stoops said. “I think that has to do with how we played, too. When you play very well, you seem to feed off the energy that is going on the field.”

The Wildcats obviously need improvement against record-setting MSU quarterback Will Rogers. The SEC’s top QB and new career completions leader (946) is coming off a 395-yard, three-touchdown passing performance in a 40-17 rout of Arkansas and has thrown for 1,133 yards and 12 TDs the past three games alone.

The Bulldogs’ defense continued its opportunistic play with two interceptions to up its takeaway total to 12 and tie for the SEC lead.

“They’re efficient at what they’re doing, so anytime they’re in that kind of configuration they can bring a lot of havoc in a lot of different ways, and they have," Stoops said.

“Our biggest thing is just finishing,” Bulldogs running back Dillon Johnson said. “I think that’s going to be the key element for us to come out with the W.”

Pass protection remains a huge concern for Kentucky, which allowed Sheron to be sacked six times last week and ranks 129th of 131 FBS teams with 25 overall. The Wildcats have tried four different offensive line combinations without much improvement.

Mississippi State has been almost automatic inside the 20, converting 20 of 21 chances with 19 touchdowns to tie for 12th in FBS at 95.2%. The Bulldogs have scored on 17 consecutive chances with 14 TDs and leads the nation in red zone TD percentage (90.5%). Kentucky ranks 36th in red zone defense (77%).

The teams have split the past six meetings with each winning at home. Kentucky is 15-9 at home against MSU and won the last home match-up 24-2 two years ago.