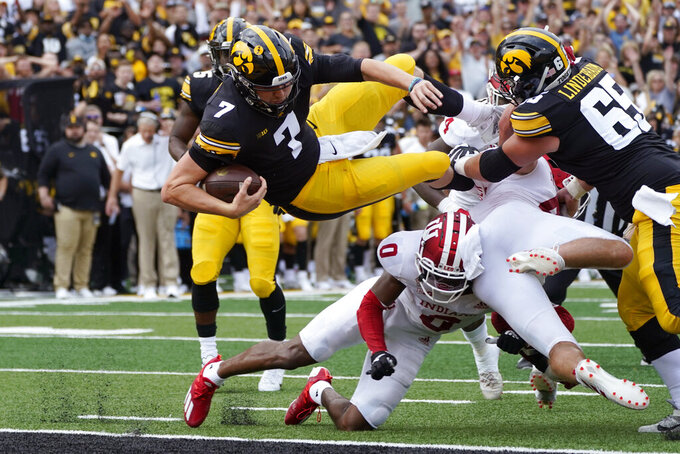 Moss' 30-yard interception return for a touchdown, the first of his two scores in the game, helped start No. 18 Iowa on the way to a 34-6 victory over No. 17 Indiana on Saturday in the opener for both teams.

Iowa intercepted three of Michael Penix Jr.'s passes — safety Dane Belton had the other interception — and had a fourth wiped out by a roughing-the-passer call.

“We were very prepared,” Moss said. “We absolutely won because of film (study), and our preparation. Our game plan today was to stop the big plays, stay on top. We made them work for their yards, and their points."

The Hawkeyes led 7-0 after their first drive, when running back Tyler Goodson scored on a 56-yard touchdown on the fourth play of the possession.

Moss' first interception came on Indiana's third offensive play, when Penix's pass went through the hands of receiver D.J. Matthews. Moss grabbed the ball and raced down the right sideline for the score.

“I was kind of sitting there,” Moss said. “(Penix) threw the ball, so I made a break on it to try to tackle (Matthews). I saw the ball pop up. I got super excited. I was foaming at the mouth to catch the ball. I didn’t realize I scored a touchdown until I was on the bench. I was like, ‘Holy cow, that happened.’”

Moss' second interception came with 1:41 left in the first half, when he stepped into the path of a Penix pass and ran 55 yards for a touchdown that put Iowa up, 28-3.

“I did my job, and good things came from that,” Moss said.

“I’ve always seen Riley as a playmaker,” defensive end John Waggoner said. “He goes hard, and he shows up every day to work. He is a competitor, so in my mind he is going to go make plays, and you obviously saw that today."

Iowa's defense rattled Penix, who was just 14 of 31 passing for 156 yards. Penix, who had just four interceptions in six games last season, was coming off offseason knee surgery. He played until early in the fourth quarter, when Indiana coach Tom Allen took him out of the game.

“He definitely looked out of sync to me, not comfortable in the pocket,” Allen said. “We'll get that fixed.”

Goodson rushed for 99 yards and a touchdown. Spencer Petras had a 9-yard touchdown run and completed 13 of 27 passes for 145 yards.

The Hawkeyes held the Hoosiers to 233 offensive yards, with only 31 rushing yards.

“It's just playing with tempo, and making the other guys uneasy,” Ferentz said of his defense. “I think our guys did that.”

“We had to play better,” Allen said. “You have to play high-level football out of the gate against a team like this, and we didn’t.”

It was the seventh consecutive win for the Hawkeyes dating to last season. It was only the third loss for Indiana in its last 18 season openers.

Caleb Shudak had field goals of 41 and 35 yards for Iowa.

DOWN, BUT NOT OUT

Iowa center Tyler Linderbaum went down with a minor injury on Petras' touchdown run in the second quarter, but got up to play the rest of the game.

Linderbaum said he was hit in the thigh by someone's helmet.

“I was a little nervous for Lindy at first,” Petras said. “But there's no tougher guy in football than Tyler Linderbaum. I knew as soon as I saw him walking that he would be all right.”

“It's going to take a lot to keep him out,” Ferentz said.

Swinton played in eight games last season and had four receptions for 52 yards. He was No. 2 on the depth chart at one of the three receiver positions.

Iowa's defense, which hasn't allowed an opponent to score more than 24 points in a game in the last 23 games, was opportunistic. The Hawkeyes' offense struggled at times, their quick start had the Hoosiers scrambling the the rest of the way.

The Hawkeyes should jump heading into next Saturday's game at No. 7 Iowa State. The Hoosiers, in the preseason Associated Press poll for the first time since 1969, have been nationally ranked for 11 consecutive weeks.