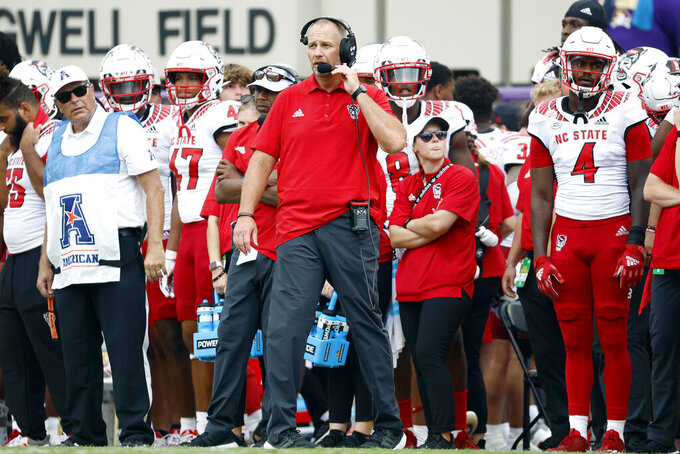 RALEIGH, N.C. (AP) — North Carolina State coach Dave Doeren shouldn't have to worry about motivation for his 18th-ranked team this weekend while playing at home against a lower-division opponent.

That's because the Wolfpack players barely averted an upset loss and have a long list of improvements for Saturday's home debut against Charleston Southern.

N.C. State (1-0) survived its opener on the road at East Carolina, though only after the Pirates missed two critical late kicks that could've sent the Wolfpack home from Greenville with a deflating loss. The Wolfpack fell five spots in this week's AP Top 25 as a result, with Doeren saying his team will have to embrace the pressure that comes with “playing from the ranked position.”

“In a lot of ways, it didn't feel like a win obviously because of our second-half performance,” he said. “But I do think it's a blessing in my opinion to have a chance to learn such a great lesson but not have a loss next to your record to do it.”

There were multiple issues, too. The offense led by preseason Atlantic Coast Conference player of the year Devin Leary sputtered after halftime and managed 25 fourth-quarter yards. The Wolfpack came up empty despite six goal-line plays with no points to show for it in the third quarter. And the defense tackled poorly most of the day.

“We came out lucky with a win, but we've got to just fix it and practice hard,” receiver Keyon Lesane said. “That's what I came out of Saturday with, that I've just got to practice harder.”

Charleston Southern (0-1) had a bumpy start to the season, surrendering 52 points in a home loss to Western Carolina last week. The Championship Subdivision program from the Big South Conference has never beaten a Bowl Subdivision opponent.

“It’s about our process, our preparation, our championship habits,” Buccaneers coach Autry Denson said. “We’re never worried about who we’re playing. We’re trying to play to our standard. So we want to meet that standard and exceed that standard.”

Doeren said before the opener that the team was about as healthy as it had been coming out of a preseason camp. Afterward, he said the team was “probably too cautious” in some of its preparation that led to tackling issues against the Pirates and the Wolfpack staff will have to take a closer look at finding the right balance next year.

Defensive coordinator Tony Gibson said the struggles against the Pirates came partly due to “trying to hit everything at full speed."

N.C. State's six goal-line plays resulted in a lost fumble by Jordan Houston and a turnover on downs when physical runner Demie Sumo-Karngbaye was stuffed four straight times from the 1-yard line.

The Wolfpack lost tight end Trent Pennix to an apparent left arm injury in the East Carolina game and won't have him for 4-6 weeks. Linebacker Payton Wilson, who missed most of last year with injury, exited the ECU win early with an upper-body injury and is considered day to day.

N.C. State backup quarterback Jack Chambers is a graduate transfer from Charleston Southern, where he was a two-time captain and second-team all-conference pick last year.

Charleston Southern is 0-25 against FBS opponents and 0-15 against teams from the Power Five conferences. The Buccaneers are facing a team that has gone 9-0 against FCS teams and 9-0 in home openers under Doeren.