No. 18 Tulane welcomes rematch with No. 22 UCF for AAC crown 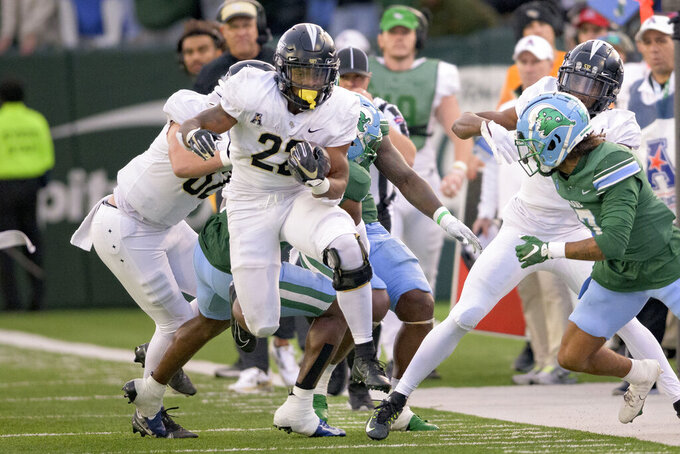 UCF running back RJ Harvey runs against Tulane during the second half of an NCAA college football game in New Orleans, Saturday, Nov. 12, 2022. (AP Photo/Matthew Hinton)

NEW ORLEANS (AP) — Next up in No. 18 Tulane's remarkable turnaround season is a high-stakes rematch that Green Wave players say they wanted.

Tulane (10-2, 7-1 AAC) not only has reached the program's first American Athletic Conference championship only one season after going a dismal 2-10, but it's hosting the game against the one team in the league that beat the Green Wave this season: the 22nd-ranked UCF Knights.

“It’s all we can think about,” Tulane center Sincere Haynesworth said. "We’re all really fired up that we get a second chance. Sometimes you watch film and you’re like, ‘Man, I wish I had that play back.’ Well, here’s our shot.”

UCF (9-3, 6-2), winner of four previous AAC titles since 2013, will try to do what no team has done in conference history: win the title game on the road after winning previously on the same field in the same season.

Beating a contending team twice in the same season tends to be challenging, “especially when you have to go to their place twice,” said UCF coach Gus Malzahn, who expressed confidence that his team is up to the task.

“I like our leadership. I like our team," Malzahn said. "We’ve played really, really good football at times and it’s a one-game season.”

Knights linebacker Jeremiah Jean-Baptiste said he and his teammates know all too well that their 38-31 victory at Tulane on Nov. 12 doesn't augur much about the rematch.

“This time, it’s going to be different," Jean-Baptiste said. "We’re playing for a trophy.”

Tulane earned the right to host the title game with a victory last week at Cincinnati that snapped the Bearcats' program record 32-game home winning streak. When that game ended, the Green Wave had to wait for the end of UCF's game at South Florida to learn their opponent this week.

The Knights nearly faltered, which would have set up a Tulane rematch against Cincinnati. But UCF tight end Alec Holler made a twisting, off-balance, one-handed catch and touched a toe in the end zone before crashing over the sideline with 20 seconds left, lifting the Knights to a 46-39 triumph.

Among those who enjoyed that finish was Tulane quarterback Michael Pratt.

“We were watching the UCF game, and honestly I was pulling for them," Pratt said. "I wanted to see these guys again."

Tulane entered this week uncertain of coach Willie Fritz's future after reports in Atlanta indicated that Georgia Tech was trying to hire him.

But Fritz said Tuesday he intended to remain at Tulane and Tech decided to hire interim coach Brent Key.

Pratt said that Fritz “told us that regardless of anything, he’s all in for the Wave. He’s going to coach us with everything he’s got, and it’s definitely awesome to hear.”

UCF QB John Rhys Plumlee accounted for 308 yards and three touchdowns in the Knights' previous meeting with Tulane, but it’s unclear how much he’ll play this week because of a hamstring injury.

“He actually feels better," Malzahn said earlier this week. "He’s dealt with this hamstring for a few weeks now. So, it’s not like something new. He’s managed it and been able to recover and come back. So, his mindset is to play.”

If not, Malzahn expects to turn to Mikey Keene, who also had to step in during victories over Cincinnati on Oct. 29 and South Florida last week.

For now, Keene still could take a redshirt this season. But if he plays at Tulane, he would lose a year of eligibility — not that he or the Knights sound concerned.

“Any time you’re on the verge of a championship, it’s all hands on deck, ready to go, whatever you have to do,” Malzahn said.

While Tulane boasts the top-ranked defense in the conference, the Green Wave had by far their worst defensive performance this season against UCF last month. The Knights rushed for 336 yards, with Plumlee rushing for 176. No other team rushed for more than 235 yards against Tulane this season.

The Knights finished with 468 yards of total offense, also a season worst for Tulane's defense.

“That’s not us. We’re not a team that goes out and gives up (nearly) 500 yards,” linebacker Nick Anderson said. "It was definitely something that’s been on my mind since then — and something we intend to go out and fix on Saturday.”

The winner likely heads to the Cotton Bowl as the top ranked non-Power Five conference team.