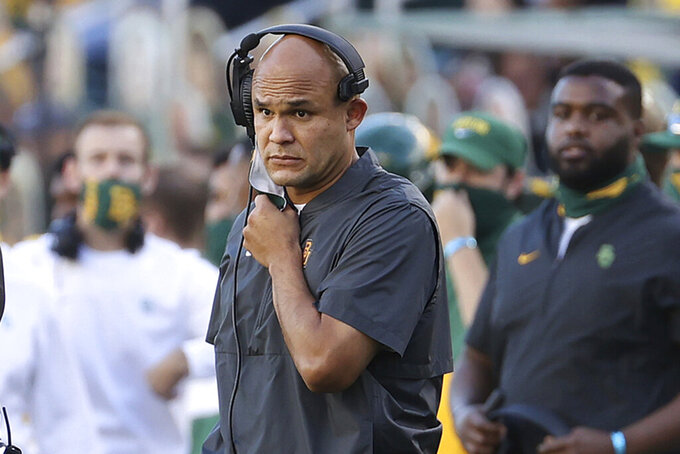 FILE - Baylor head coach Dave Aranda looks to an official in the second half of an NCAA college football game against TCU in Waco, Texas, in this Saturday, Oct. 31, 2020, file photo. BYU coach Kalani Sitake said he has known Aranda for a long time, and that they have shared a lot of ideas and philosophies about coaching.Baylor and BYU meet in a matchup of 5-1 teams on Saturday, Oct. 16, 2021. (Jerry Larson/Waco Tribune-Herald via AP, File)

WACO, Texas (AP) — There will be a Big 12 preview for BYU and personal reunions among several coaches when the 19th-ranked Cougars play at Baylor two years before they officially join the conference.

Baylor coach Dave Aranda appreciates the longer-term view of becoming league foes and even seeing some old friends, but his more immediate concern about Saturday’s matchup of 5-1 teams is facing a veteran-heavy opponent that had big expectations and is now coming off its first loss.

“Just them entering the conference and their inclusion here coming up is, I think, really good for the conference and it’s going to be a welcome addition,” Aranda said. “But I think in our short-term view right here, it is probably an angry team that’s showing up at McLane (Stadium)."

The Cougars opened the season with three consecutive wins over Pac-12 teams, made the top 10 and were getting discussed as a potential playoff team before slipping up at the midpoint of their regular season. They had four turnovers in a 26-17 loss last weekend to Boise State after only two total turnovers their first five games.

“We’ve been playing really good football, and I think if we use this game as sort of a wakeup call and kind of bring everything back into perspective and start doing what we know we can do, we can finish out a great season," receiver Gunner Romney said.

“It's humbling and it’s a good opportunity for us to focus a little bit more," added BYU coach Kalani Sitake. "That's going to be the key, learning from the mistakes and making sure that stuff doesn’t happen again."

Offensive coordinator Jeff Grimes is in his first year at Baylor after running his attacking, multiple-formation scheme the past three seasons at BYU. The Bears average more than 38 points and 461 total yards per game (227 rushing, 234 passing), with a Big 12-best 7.31 yards per play. Fourth-year junior and first-year starting quarterback Gerry Bohanon has 1,337 yards and 11 TDs passing without an interception.

“A lot of similarities,” Sitake said. “We’re familiar with what they’re doing offensively, their identity offensively. It’s going to be a good matchup for us.”

The Cougars, who after last season had quarterback Zach Wilson taken as the No. 2 overall NFL draft pick, average 404 total yards and 27 points a game. Jaren Hall, who won the starting QB job in camp, returned last week after missing two games because of bruised ribs. Baylor Romney, the backup who started the games Hall missed, could be back from concussion protocol.

Sitake, the former BYU running back in his sixth year as head coach, said he and Aranda have long shared ideas and philosophies about coaching. Aranda briefly in 2008 worked at Southern Utah for Ed Lamb, now BYU’s assistant head coach. Aranda was defensive coordinator at Utah State a decade ago on a staff that also included BYU linebackers coach Kevin Clune and Cougars defensive coordinator DC Ilaisa Tuiaki. First-year Baylor offensive line coach Eric Mateos was at BYU the past two years.

BYU's only previous trip to Waco was a 40-36 loss in the 1983 season opener. The Cougars then won their next 25 games, through their undefeated national championship 1984 season that included a 47-13 home win over Baylor. The two teams are scheduled to play again next year in Provo, Utah, before becoming conference foes in 2023. BYU, a football independent, accepted an invitation last month to join the Big 12.

SETTLING IN AFTER SCORES

Baylor allows only 16.3 points a game, but has given up an opening-drive TD in each of its last three games. Aranda said defenders, with basic calls focused more on them than the opponent, have done a nice job getting over those early scores.

“See ball, go tackle,” Aranda said. “I think after that first drive, and after that anxiety has come and gone, I think that’s how we’re playing.”

The winner will get bowl eligible at six wins. When bowl eligible, BYU gets a spot in the Independence Bowl in Shreveport, Louisiana, unless the Cougars get into a New Year's Six bowl game. ... This is the first time since 1999 that Baylor has played a non-conference game after September in a regular season.