No. 19 BYU looks to reignite stagnant run attack vs Wyoming 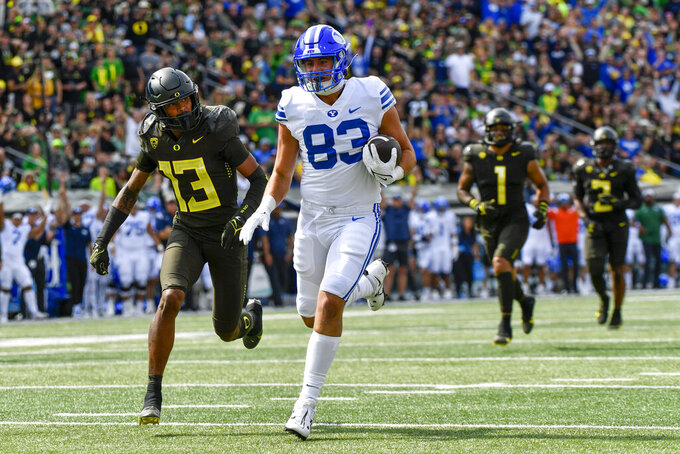 BYU tight end Isaac Rex (83) is chased by Oregon defensive back Bryan Addison (13) as he heads to the end zone during the first half of an NCAA college football game, Saturday, Sept. 17, 2022, in Eugene, Ore. (AP Photo/Andy Nelson)

PROVO, Utah (AP) — Running the ball has turned into a tough task for BYU after a promising start to the season.

The 19th-ranked Cougars and their ground game have struggled in back-to-back weeks against No. 15 Oregon and No. 17 Baylor. BYU (2-1) has generated only 144 total yards rushing over its last two games — a scant 2.53 yards per carry.

It offers a stark contrast to their season opener when the Cougars churned up more than 300 yards rushing against South Florida.

“We pride ourselves on running the ball at BYU,” said tight end Isaac Rex, whose team hosts Wyoming (3-1) on Saturday. “We want to get better.”

For BYU coach Kalani Sitake, the reasons are simple — lack of technique and missed blocking assignments.

“We just need to play more disciplined,” Sitake said. “I don’t think we’re disciplined enough as a team. I need to do a better job to make sure our guys are playing correctly and that we show up better.”

It doesn’t get any easier to run the ball this weekend against a Wyoming defense that just limited Air Force’s vaunted option offense to 171 yards rushing. The Falcons were averaging 508.5 per game.

BYU and Wyoming are familiar rivals as founding members of the Mountain West Conference. The schools played annually until the Cougars left the league in 2011. BYU hasn’t lost to the Cowboys since 2003 – winning eight straight in the series.

The Cowboys know there’s more than shutting down the run game of BYU. They also need to keep close tabs on quarterback Jaren Hall, who has thrown for at least 250 yards in seven straight games.

“It’s more like traditional football,” Wyoming coach Craig Bohl said. “The biggest thing is you have an offense that truly is balanced. You have a quarterback who I think is exceptional … and they can do so many different things.”

After spending four seasons in a backup role at Utah State, Andrew Peasley is making the most of his chance at Wyoming. The junior quarterback transferred to the Cowboys after last season and has given their run-oriented offense an added dimension in his first few games as a starter.

Peasley completed 78% of his passes against Air Force, throwing for 162 yards and a touchdown. It marked the third consecutive game he has completed more than 60% of his passes, becoming the first Wyoming quarterback since 2015 to do that over three straight contests.

Oldroyd went a perfect 13-of-13 on field goal attempts in 2020 and extended his streak to 16 straight made field goals early last season.

BYU got a scare against Oregon when linebacker Keenan Pili suffered a hand injury. Pili dislocated a pair of fingers but said he is ready to go on Saturday. He missed most of last season after tearing his ACL during a 27-17 win over Arizona State only three weeks into the season.

Pili said his knee has returned to full strength and isn’t limiting him on the field.

“I honestly feel way better than I thought I would,” Pili said.

Wyoming last faced BYU in the 2016 Poinsettia Bowl, falling to the Cougars 24-21. The two teams last met during the regular season in 2010. For many decades, though, they were a fixture on each other’s schedule and a heated rivalry developed between the two schools.