No. 2 Georgia looking for return to top form against Auburn 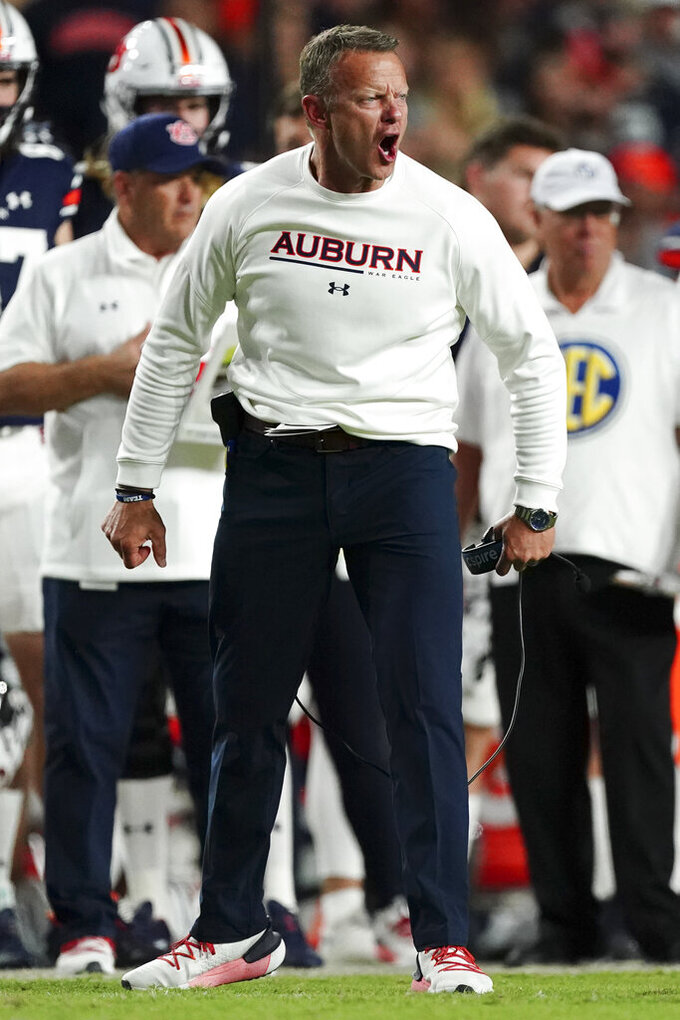 Auburn head coach Bryan Harsin reacts on the sideline in the first half of an NCAA college football game against LSU, Saturday, Oct. 1, 2022, in Auburn, Ala. (AP Photo/John Bazemore)

The Bulldogs, who play Auburn on Saturday, fell from the top spot in The Associated Press Top 25 this week after having to rally for a 26-22 win at Missouri last week. Georgia (5-0, 2-0 Southeastern Conference) trailed 13-0 early and 22-12 in the fourth quarter before finishing strong.

The major scare at Missouri followed a similarly uninspiring 39-22 win over Kent State. The back-to-back shaky outings have at least temporarily ended talk that Georgia might be better than last season’s national championship team.

Auburn (3-2, 1-1) experienced the other side of a big comeback last week, leaving more pressure on embattled coach Bryan Harsin. The Tigers led LSU 17-0 before losing 21-17 at home.

Harsin would receive a much-needed boost if Auburn can end a streak of five straight losses in the series with Georgia. Even with Georgia’s recent inability to maintain the form it showed in outscoring its first three opponents 130-10, Auburn’s challenge is daunting. The Bulldogs are favored by 29 1/2 points.

“Defending national champions. Overall, just as a football team, they’re well-coached,” Harsin said. “They’ve had a lot of success with their program, and certainly you see that right now.”

It will be the first road start for Auburn quarterback Robby Ashford. T.J. Finley opened the season as the starter before suffering a shoulder injury.

Georgia coach Kirby Smart shrugged off concerns the team hasn't matched the production of its strong start to the season.

“I don’t look at it as a hitting slump or some kind of funk or anything like that,” Smart said.

UNDERDOGS FOR A MOMENT

“I was excited that we were the underdogs for a moment in that game,” Jackson said. "It allowed us to find out a lot about ourselves as a team and we were down 10 or 13 points, which is hard to come back from on the road. Most teams would’ve probably folded. But one thing about us, we showed resiliency and with that brotherhood we have, we were able to overcome that adversity.”

In fact, the Tigers have been outscored 104-21 in the second half of their last eight games against Power 5 teams.

“We’ve got to be able to find ways to continue to put points on the board,” Harsin said. “It’s not just the half of football, you’ve got to play all four quarters.”

Georgia will be without its top-rated NFL prospect. Defensive tackle Jalen Carter is expected to miss at least one game after suffering a knee injury against Missouri.

Meanwhile, defensive back Javon Bullard returned to practice Wednesday and is expected to play after missing one game following his DUI arrest.

Auburn lost one of its top pass rushers, Eku Leota, to a potential season-ending pectoral injury against LSU. The Tigers have since listed a 4-2-5 defensive scheme on the depth chart with the lone edge rusher Derick Hall.

A 6-foot-4, 257-pound graduate transfer, Leota has 17 tackles, including five tackles for loss and two sacks. He had seven sacks last season after transferring from Northwestern.

Anders Carlson has had one of Auburn’s best kicking careers, trailing only brother Daniel on the program’s all-time scoring chart. But Carlson has missed attempts of 45 and 40 yards in the past two games, leading to questions about whether freshman Alex McPherson could get a shot.

McPherson was the nation’s top-rated kicker and set an Alabama high school record with a 61-yarder.

“Alex is ready, but Anders still has our full support, and this week is going to be a great week to get back on track and be consistent in the Georgia game,” Harsin said.

AP Sports Writer John Zenor in Auburn, Ala., contributed to this report.