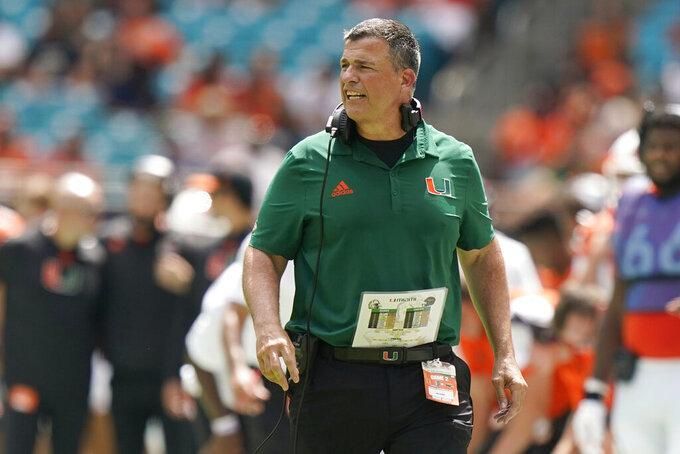 COLLEGE STATION, Texas (AP) — This was supposed to be the year Texas A&M finally took the next step and contended with Alabama for the SEC title.

Instead, last week’s 1 7-14 upset at home against scrappy Appalachian State sent the Aggies tumbling from No. 6 to No. 24 in the AP Top 25 and took some luster off Saturday night’s matchup against 13th-ranked Miami.

Now the Aggies are looking for ways to move on from that stunning loss and salvage a season that started with so much promise.

Senior receiver Ainias Smith had a simple message to his teammates this week to try and get Texas A&M back on track.

Coach Jimbo Fisher took the brunt of the criticism for the loss with people questioning him losing to an 18 ½-point underdog from the Sun Belt Conference at home while earning $9 million a year.

“We did not execute to the level we needed to execute to win the game,” he said. “I’m very disappointed in how we played and how we did. We had opportunities to win the game and should have played much better. We have to practice better, play better and execute at a higher level against a very good football team.”

The Hurricanes opened the season with two wins, and new coach Mario Cristobal isn’t changing his approach this week despite the idea that a victory over Texas A&M would be a nice signature win in his first season at the school.

He preaches a simple style: get better every day, win the week, move on to the next, ignore the noise.

“The affirmation is what you put on film,” Cristobal said. “That’s your resume. We really focus on being internally driven and gearing everything towards that. Because everything outside of that, all the noise, the fluff, it ain’t going to help you when you’re playing against really good football teams in clutch situations.”

Miami opened the season with Bethune-Cookman and Southern Miss, and Hurricanes quarterback Tyler Van Dyke insists that there was no peeking ahead at Week 3 while prepping for those opponents. But earlier this summer, yes, Texas A&M was on his mind.

“This is the team I was probably studying the most, watching their spring game, watching some film from last year,” Van Dyke said. “Once the season started, we didn’t really watch much film on them, obviously focusing on the other two teams we played before. We watched a good amount of film earlier in the summer.”

The Hurricanes are eager to see what game-night atmosphere at College Station is all about. If attendance on Saturday night tops 90,000 — both of Texas A&M’s games this season have exceeded that — then it would be one of the nine biggest road crowds in Hurricanes’ history.

“When you’re growing up and you’re playing college football, you want to play in games like this,” Cristobal said. “You recognize their tradition, and you respect it, them and their program and you can’t wait for the opportunity to find out where you are as a program.”

This will be the ninth time that Fisher coaches against Miami. The previous eight were all during his time at Florida State; Fisher and the Seminoles won the first seven of those meetings, before Miami prevailed 24-20 in 2017. Fisher and Cristobal have never gone head-to-head as head coaches.

Texas A&M QB Haynes King’s job could be in jeopardy after he managed just 97 yards passing with no touchdowns last week as he failed to move the offense effectively. Fisher said he was evaluating the position and would consider a change right after the loss.

Miami is 2-1 against Texas A&M, winning at home in 2007 and then at College Station in 2008. Texas A&M’s win was in 1944, a 70-14 victory — still the most points ever allowed by the Hurricanes, who threw a school-record seven interceptions in that contest. The Aggies are scheduled to visit Miami on Sept. 9, 2023.

Miami RB Henry Parrish Jr. played for Mississippi last year, and had 58 yards on nine carries for the Rebels in a 29-19 home win over Texas A&M. “I’ve heard they have the biggest stadium in SEC football, 100-and-whatever thousand fans they have,” Parrish said, adding his recollection of Texas A&M’s defense was this: “Really fast.”

Texas A&M running back Devon Achane scored both the team’s touchdowns last week after scoring on a 26-yard run and a 95-yard kickoff return. It was the seventh multi-touchdown game in the career of Achane, who is also a sprinter on the school’s track team. He leads the SEC and ranks second in the nation by averaging 48 yards a kickoff this season.

Texas A&M was a nine-point preseason favorite, according to FanDuel Sportsbook. But after the loss to Appalachian State, the Aggies are a 5.5-point favorite.