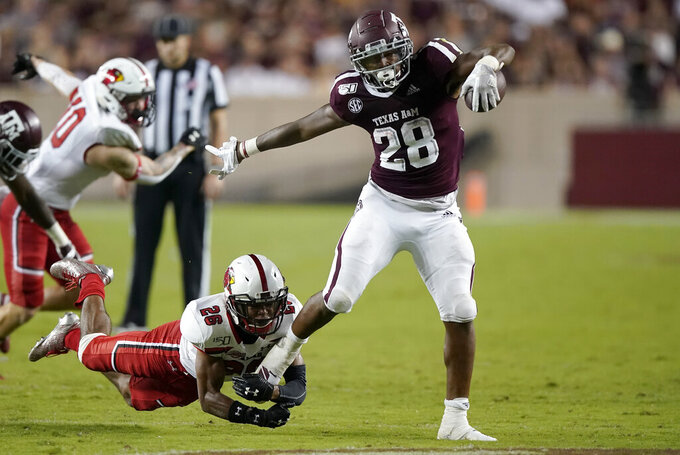 Texas A&M running back Isaiah Spiller (28) shakes off a tackle by Lamar defensive back Tariq Gordon (26) during a touchdown run in the second half of an NCAA college football game, Saturday, Sept. 14, 2019, in College Station, Texas. (AP Photo/Sam Craft)

Auburn looks to remain undefeated as the Tigers open Southeastern Conference play with their first true road game of the season against a Texas A&M team coming off a rout of FCS school Lamar a week after losing at No. 1 Clemson.

Auburn QB Bo Nix vs. Texas A&M's secondary. The freshman will make his first start in a hostile environment at Kyle Field, with a capacity of 102,733, against a secondary tied for third in the nation with five interceptions. Nix was picked off twice in Auburn's opener against Oregon, but hasn't thrown an interception since. He hasn't put up big numbers either, with the Tigers ranking last in the SEC in yards passing.

Auburn: RB JaTarvious Whitlow has been the Tigers' best offensive weapon, especially with injuries to the receivers. He already has 64 carries in three games, for 341 yards and three touchdowns. He also fumbled three times against Tulane, losing a pair of them.

Texas A&M: RB Isaiah Spiller. The freshman was great last week in A&M's first game without Jashaun Corbin, who sustained a season-ending hamstring injury against Clemson. He ran for 116 yards and two touchdowns against Lamar to become the first freshman in school history to have two 100-yard rushing games in the first three games of a season.

DE Marlon Davidson has been the SEC's defensive lineman of the week after each of the past two games. ... Auburn had three players with 100-plus yards rushing in the Kent State game for the first time since 1983. That group included backup quarterback Joey Gatewood. ... Nix made his first career start in Arlington, Texas, against No. 16 Oregon. ... Auburn has won its last six games in Texas. ... The Tigers are 3-0 for the 50th time in franchise history. ... Texas A&M has won four of its last five SEC openers. ... The Aggies have scored at least 10 points in 43 straight games. ... Texas A&M coach Jimbo Fisher is 1-1 against Auburn with his win coming in Florida State's 34-31 win over the Tigers in the 2013 national title game. ... Seven Aggies scored a touchdown against Lamar.