No. 9 Irish have plenty of work and short week for Toledo 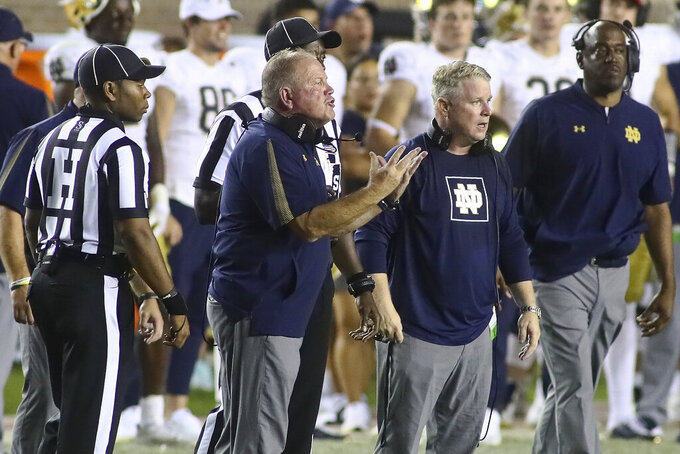 SOUTH BEND, Ind. (AP) — Coach Brian Kelly knows his No. 9 Fighting Irish need to improve in several areas. A difficult season opener on the road was all the proof he needed.

Notre Dame blew an 18-point lead at Florida State on Sunday night before regrouping to win 41-38 in overtime.

“When you are up 38-20 on the road and you give that lead up, many teams do not get out of there with a victory,” Kelly said Monday after a short film review following an early-morning arrival back. “Our guys hung in there. We came up with the big stop when we needed it defensively. They just showed their mettle and grit. As I said last night, I really like this group. We got a lot to do, a lot of work to clean up.”

The Irish’s home opener is Saturday against Toledo of the Mid-American Conference.

Despite a record-setting performance by graduate transfer quarterback Jack Coan in his Notre Dame debut — 26-of-35 passing for 366 yards and four touchdowns with one interception — the Irish struggled to run the football with their rebuilt offensive line, finishing with just 65 yards on 35 carries. Preseason All-American Kyren Williams managed just 42 yards on 18 carries.

On the other side of the ball, new defensive coordinator Marcus Freeman’s aggressive unit was shredded by a Florida State attack that produced 442 total yards, including 264 on the ground.

“Our defense caused havoc,” Kelly said. “We had the sacks (five, two by defensive end Isaiah Foskey), we had the interceptions (three, two by All-America safety Kyle Hamilton), but we gave up big plays. We’re transitioning from a different mindset the way we need to play defense, and you cannot let your guard down for a moment or you’re going to give up a big play.”

The offense had its share, too. Freshman Blake Fisher, who started at left tackle, suffered a right knee injury in the first half and was replaced by sophomore Michael Carmody. Reserve tight end Kevin Bauman was lost to a fractured leg that will require surgery for a plate and screws that will keep him out six weeks. Fisher and Simon were scheduled for MRIs Monday afternoon.

“(Coan) pushed the ball well down the field,” Kelly said. “I thought we protected darn well. (But) we’re going to (have to) run the ball a little better.”

Only offfensive lineman Jarrett Patterson returned as a starter from last season’s unit that opened the 2020 season. Fisher and graduate student Josh Lugg started at the tackle spots, while junior Zeke Correll, who moved over from center, and graduate student Cain Madden, a transfer from Marshall, were the guards.

“We’re playing a really good team in Toledo,” Kelly said of the Rockets, who are coming off a 49-10 victory over Norfolk State on Saturday. “After watching their film, this is probably the finest MAC team that we’ve brought into the stadium since I’ve been here. So, we’re going to have to be prepared and we’re on a short week.”