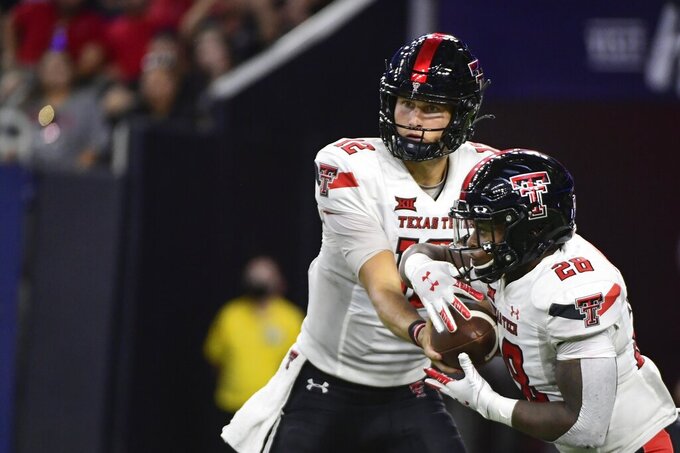 FILE - In this Saturday, Sept. 4, 2021, file photo, Texas Tech quarterback Tyler Shough (12) hands off the ball to running back Tahj Brooks (28) against Houston during the second half of an NCAA college football game in Houston. There are a few simple explanations about why Texas Tech hasn't really spread the ball around that much on offense. Ezukanma makes things look so easy with all those big plays while leading the nation in receiving and Tahj Brooks has more than 100 yards rushing in both games with four touchdowns when he wasn't even expected to be the team's top running back. Plus, the Red Raiders (2-0) just haven't run a whole lot of plays. (AP Photo/Justin Rex, File)

LUBBOCK, Texas (AP) — There are a few simple explanations about why Texas Tech hasn't really spread the ball around that much on offense.

Erik Ezukanma makes things look so easy with all those big plays while leading the nation in receiving. Tahj Brooks has more than 100 yards rushing in both games with four touchdowns when he wasn't even expected to be the team's top running back.

“When you only snap it 48 times and 52 times ... that’s not very many plays, especially when you’re running the ball with Tahj as well as we’re running it right now,” coach Matt Wells said. “I’d rather be known as a team that does something really good. And right now we’re getting it to Erik and he’s making plays. So teams need to stop that."

Florida International (1-1) faces that task Saturday night in the final non-conference game for the Red Raiders, who held on for a 28-22 win over Stephen F. Austin in their home opener last week.

Ezukanma has 13 catches for 323 yards, with six plays of at least 30 yards; three of those are at least 50. His 161.5 yards per game are more than twice that of the Big 12's second-leading receiver.

“That’s a guy that you’ve got to make sure that somehow, some way you’ve got somebody on him,” FIU coach Butch Davis said. “And the thing that makes it very, very difficult is that they do have a very good, physical, strong, powerful running back.”

The 5-foot-10, 220-pound Brooks has stepped up with junior SaRodorick Thompson, the Red Raiders' top rusher that past two seasons, recovering from shoulder surgery.

Wells said last week that Thompson was cleared for contact, but gave no new updates going into the third game. The coach had said after Thompson's surgery in April that the projected recovery time would be the first three weeks of the season.

D'vonte Price has 276 yards rushing and three TDs for FIU, but fumbled twice in their overtime loss at home to Texas State. He turned the ball over on third-and-goal from the 2, and fumbled at the end of a 15-yard run to start the fourth quarter.

“Both times he had both hands over (the ball) and somebody came from the side and punched it out,” Davis said. “He was trying to protect the ball.”

The Panthers, who didn't force any turnovers, had a third fumble when quarterback Max Bortenschlager was sacked and lost the ball on their possession to start overtime.

The 329 receiving yards by Ezukanma, who broke his arm at the end of spring drills, are the most in the first two games of a season for the Red Raiders since 2011. Brooks’ 237 yards on the ground are the most this early since they moved to a spread offense in 2000.

The Panthers won their last game against a Power Five opponent, but have lost eight of nine games overall since that win over instate foe Miami in November 2019. They lost their final two games in 2019, and went 0-5 in a pandemic-shortened 2020 schedule. Their only win since was 48-10 over lower-division Long Island in this year’s opener.

Texas Tech super senior linebacker Colin Schooler is the national active leader for tackles (375) and tackles for loss (51). Schooler was a three-year starter at Arizona, but went to Tech as a graduate transfer just before last season after the Pac-12 initially opted against playing in 2020 because of the pandemic before a late fall start.