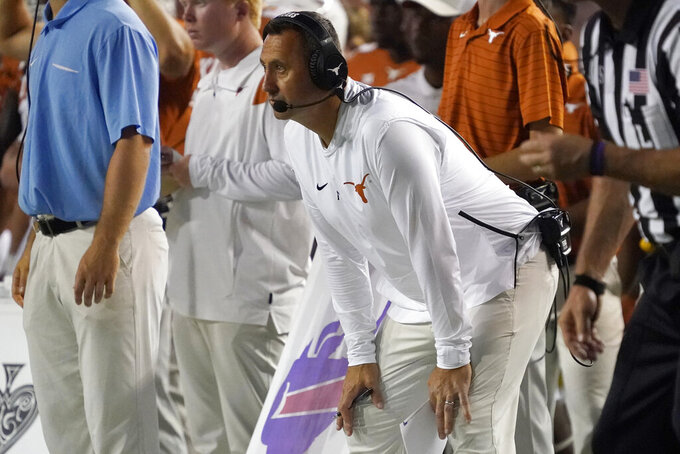 MORGANTOWN, W.Va. (AP) — The Big 12 is no longer considered a prolific passing league, replaced for now by a wave of ground attacks that are producing plenty of individual stars.

It didn't happen in the last two seasons. This year, no quarterbacks are among the top 25 in the nation in passing yards.

No one seems to miss those gunslinger days. Big 12 teams are now content with mostly handing the ball off — and carrying it far.

“It sure looks like a physical conference. Everybody plays a physical brand of football," Texas coach Steve Sarkisian said. "I don’t think this is the Big 12 of old when you watch from afar. Teams believe in running the ball and stopping the run.

“The old adage of that’s where the game is won and lost at the line of scrimmage is kind of what it feels like.”

The running resurgence is becoming a team effort, too. Last weekend Texas ran for 427 yards, Baylor 307 and No. 25 Kansas State 269.

In three games Baylor has already surpassed last year's team rushing total. The Bears didn’t have anyone rush for 100 yards in 2020. Jeff Grimes was hired from BYU as Baylor’s offensive coordinator in the offseason and the Bears already have six 100-yard efforts.

“Long way to go, but I like what we've done so far,” said Baylor coach Dave Aranda.

Behind Smith, Ebner and Taye McWilliams, Baylor is averaging 321 yards on the ground, which is fifth in the nation. McWilliams has a league-high 13 yards per carry.

The 217-pound Smith moved this season from linebacker to running back, where he started his career, to give the Bears a needed physical runner. He is the first Baylor running back with three consecutive 100-yard games since 2015.

The Bears will face the league's top rush defense Saturday against No. 14 Iowa State. The Cyclones also have Hall, a preseason Associated Press all-American who got off to a slow start with a pair of 69-yard games before rushing for 100 yards as Iowa State easily beat UNLV.

Vaughn has been the league's top workhorse so far with 62 carries in three games. He needed just 13 games to surpass 1,000 career yards, one game faster than school career record-holder Darren Sproles.

Vaughn won't be the running back with the highest one-game production so far on the field Saturday. That honor goes to Oklahoma State's Jaylen Warren, a Utah State transfer who has helped the Cowboys soften the loss of all-American Chuba Hubbard to the NFL.

Bijan Robinson, Alabama transfer Keilon Robinson and Roschon Johnson ripped off TD runs of longer than 60 yards last week and Texas had six rushing TDs against Rice. The Longhorns are looking for more consistency, though. Bijan Robinson, who is averaging about 100 yards per game, was limited to 69 and Texas had 252 total yards a week earlier in a loss at Arkansas.

Keep an eye on TCU’s Zach Evans, who averaged 7.7 yards per carry as a freshman last year and ran for 190 yards in his last game Sept. 11 against California.

“I’ve been laughing because nobody mentions Zach Evans,” Horned Frogs coach Gary Patterson said. “Just don’t talk about Zach Evans. We’ll just keep running him. They won’t pay any attention to him, and we’ll keep doing the things that we need to do.”

Evans initially signed with Georgia, but was released from his national letter of intent and became TCU’s first five-star signee.

Evans said he ignores the lack of hype he now gets.

“Since I got here, it got me out of that mindset and it’s about the team name now,” he said.

Tahj Brooks' 237 rushing yards in Texas Tech's first two games were the most in that span since the Red Raiders went to the spread offense in 2000. Brooks filled in for SaRodorick Thompson, the team's top rusher the past two seasons who was recovering from shoulder surgery.

Thompson got his first carries of the season against Florida International last week.