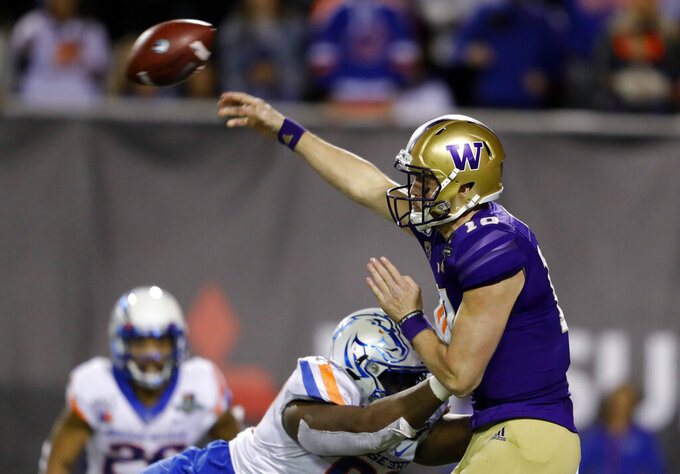 Eason started 13 games for Washington last season after beginning his college career at Georgia and transferring following his sophomore season. He threw for 3,132 yards and 23 touchdowns for the Huskies in a season where at times he looked like a sure first-round pick and at other times it appeared that another season of college would help his draft status.

"I want to thank everyone at the UW — my teammates, the coaching staff and the fans — for making these last two years so memorable," Eason said in a statement. “I'm very happy that I was able to come home and play for the Dawgs, and will always be grateful.”

Eason's decision caps weeks of debate about his future. He chose to play in Washington's bowl game victory over Boise State rather than follow the path of NFL-bound teammates Hunter Bryant and Trey Adams, who skipped the game.

Ultimately, the draw of the NFL won out.

“The opportunity to play quarterback in the NFL has been a lifelong dream and my heart is set on the challenge ahead," Eason wrote in a social media post announcing his decision.

Eason was a five-star recruit out of nearby Lake Stevens, Washington, who opted to go across the country to play at Georgia. He started as a freshman for the Bulldogs but lost the job to Jake Fromm during his sophomore season after suffering an injury in the season opener.

Eason sat out the 2018 season after transferring to Washington and beat out Jake Haener for the starting job during fall camp.

Eason completed 64.2% of his passes and had standout games early in the season against Eastern Washington, BYU and Arizona. His best game may have come in a loss to Oregon, in which Eason was 23 of 30 for 289 yards and three touchdowns.

Eason has the prototypes of an NFL quarterback, standing 6-foot-5 with one of the strongest arms in college. But issues with consistency popped up during his collegiate career.

“We wish Jacob nothing but the best," Lake said. “He was a terrific teammate who worked very hard in his two years as a Husky. I'm looking forward to watching him succeed at the next level.”