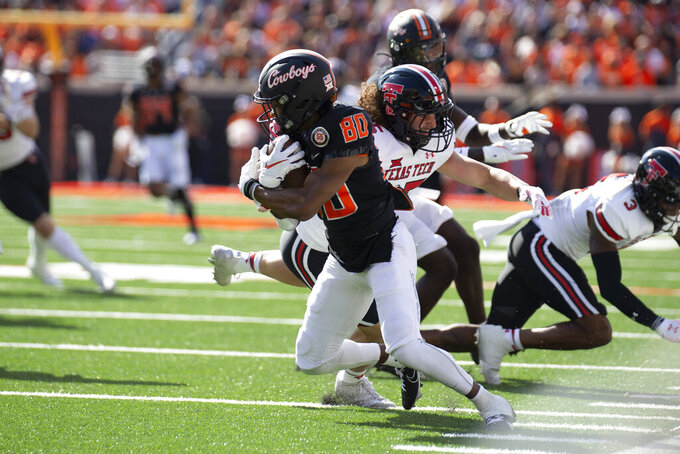 Spencer Sanders ran for two touchdowns and passed for another and No. 7 Oklahoma State beat Texas Tech 41-31 on Saturday.

Tech ran 104 plays in the game to Oklahoma State's 86, but the Cowboys had the energy they needed late. They trailed 24-20 at halftime before outscoring the Red Raiders 21-7 in the second half.

“They had some gas in the tank," Oklahoma State coach Mike Gundy said. "And we’ve been in these battles before. And in the end, there wasn’t any panic. Guys had a clear mind. They were able to listen and absorb information. There’s no panic, and that situation gives you the best chance.”

Texas Tech redshirt freshman Behren Morton got his first career start in place of Donovan Smith. He completed 39 of 62 passes for 379 yards and two touchdowns for the Red Raiders (3-3, 1-2).

Jerand Bradley caught eight passes for 119 yards and a touchdown and Trey Cleveland caught nine passes for 110 yards for a Texas Tech team that was playing its fifth straight ranked opponent and already had claimed wins over Houston and Texas.

“Where they’re at right now, they’ve got a lot of frustration because we’re right there," Tech coach Joey McGuire said. “It’s different if you come into a game and you get blown out. You’re going to be frustrated and you hate to lose. But in our three losses, I felt like we have played every play, and we have fought our tail off every single snap.”

Morton completed 24 of 39 passes for 220 yards and both scores in the first half to help the Red Raiders take a 24-20 lead at the break. Tech gained 347 yards on 57 plays in the first two quarters.

Sanders rolled out and scored on a 2-yard touchdown run to trim Texas Tech's lead to 31-29 in the third. Sanders' shovel pass to Jaden Bray for the 2-point conversion tied it with 3:18 left in the third quarter.

On Texas Tech's next possession, Morton made one of his few mistakes. Oklahoma State linebacker Mason Cobb intercepted him and returned the ball 13 yards to the Tech 19. Tanner Brown's fourth field goal of the game gave the Cowboys a 34-31 lead with 3 seconds left in the third quarter.

Oklahoma State closed it out when Dominic Richardson scored on a 7-yard run with 2:27 remaining.

“Every loss feels the same to me, man,” McGuire said. "They all suck. I’m just telling you. If you ever hear me saying it’s a good loss or anything like that, I want somebody to slap me, please.”

Texas Tech: The Red Raiders were again competitive against a top-flight opponent. It was just a matter of a few plays here and there. Tech's other losses were 27-14 at North Carolina State and 37-28 at Kansas State. Four of Tech's final six games are at home.

Oklahoma State: The Cowboys prevailed, despite the defense getting off to a rough start. The Cowboys allowed 125 yards in the fourth quarter but held the Red Raiders scoreless.

With Oklahoma State still leading 34-31, it appeared Oklahoma State safety Kendal Daniels sacked Morton near the Texas Tech goal line, but instead, Daniels was called for targeting and ejected. That means the Cowboys lose Daniels for the first half of the TCU game.

Gundy doesn’t think the Cowboys should lose Daniels for part the upcoming contest, but he said there’s no doubt it was targeting.

“In the heat of the moment, all he knows is he had a dead shot at the quarterback in the end zone," Gundy said. "And you cannot lower your head. You have to keep your eyes up all the time. The rule’s put in place to protect, and it’s a good rule. Nobody likes the rule because people think ‘it’s football, football is football,’ until that’s your kid that’s getting hit. But it was a correct call and he needs to learn.”

Texas Tech tried to surprise the Cowboys with an onside kick in the first quarter and executed it perfectly except for one problem: Oklahoma State’s Demarco Jones called a fair catch.

Instead of Tech getting possession with a 7-0 lead, Oklahoma State got possession and Tech was called for kick catch interference.

“As soon as they kick it, you show fair catch and they can’t catch it.”

Oklahoma State added Bob Fenimore to its Ring of Honor on Saturday. The halfback finished ninth in the Heisman Trophy vote in 1944 and third in 1945. He joined Barry Sanders and Thurman Thomas.