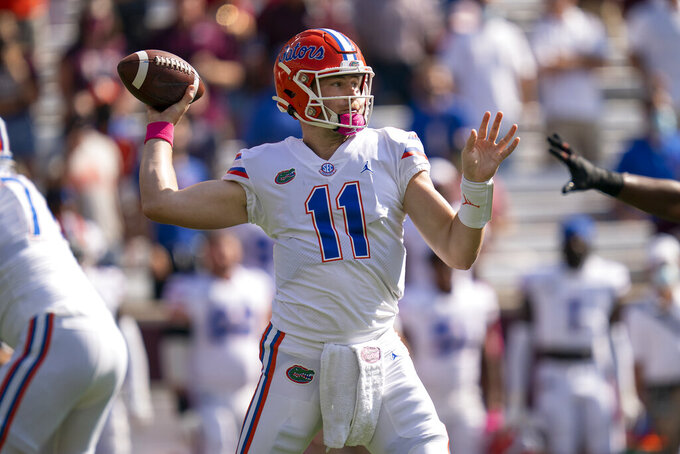 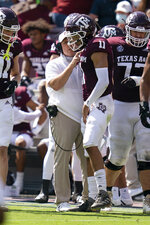 COLLEGE STATION, Texas (AP) — Jimbo Fisher got his first win against a top-five opponent since taking over at Texas A&M.

And just like that, he started looking ahead to next weekend.

“This game shows you what you’re capable of,” the coach said. “Now I want to see what do you follow up with?”

Spiller helped get the Aggies get into position for Small’s decisive kick, sending A&M to its first win over a top-five team since a 41-38 victory over No. 3 Auburn in 2014. It was the school's first such victory at home since it toppled No. 1 Oklahoma 30-26 in 2002.

“I think this is a real big confidence-booster,” Spiller said. “I feel like we really gained our identity.”

Fisher brushed off the notion that it was a signature win or it meant more than anything he's done in three seasons in College Station.

Kellen Mond threw a 51-yard pass to Caleb Chapman for a tying TD with about 4½ minutes to go.

The Gators were driving when Buddy Johnson forced a fumble by Malik Davis, and it was recovered by DeMarvin Leal to set up the game-ending field goal.

“We had plenty of opportunities to put the game away," quarterback Kyle Trask said. “So you can’t blame it all on one play because it shouldn’t even been close if we would have executed on the drives that we didn’t score on.”

Unlike Fisher, Mond, who became Texas A&M's career leader in yards passing Saturday, raved about the importance of such a high-profile win.

“We’ve had some big wins (but) this is definitely huge," he said. “This definitely I feel like can be a culture-changing win and only can give this team more confidence."

Trask, who was named after Kyle Field by his A&M-graduate parents, had 312 yards passing and four TDs. But the Gators were done in by the late mistake and another poor performance by their defense.

“We’re playing 10 SEC games in a row," Florida coach Dan Mullen said. “We have to get over this one quick. It’s more like an NFL schedule.”

Mullen was disappointed that the Gators allowed A&M to convert 12 of 15 third-down opportunities.

“We’re going to evaluate a lot of things defensively, and our ability to make plays and get off the field," he said.

Chapman finished with nine receptions for 151 yards and two touchdowns as the Aggies bounced back from last week’s lopsided loss to No. 2 Alabama.

Leon O’Neal intercepted Trask on Florida’s first drive of the second half, but the play was wiped out by a hands-to-the-face penalty on Michael Clemons. There was a scuffle after a play later in the drive that resulted in unsportsmanlike conduct penalties for both teams.

Kadarius Toney grabbed his second TD reception on the next play, a 37-yarder that made it 28-17 Gators with about 10 minutes left in the third.

Another unsportsmanlike conduct penalty on the Aggies, this one on Andre White, occurred on the ensuing kickoff and it looked as if Florida was in control of the game.

But then Spiller got going. Texas A&M grinded it out on its next drive, passing just once on a 10-play possession capped by a 3-yard TD from Spiller.

Florida led 28-24 early in the fourth when Spiller struck again, running 19 yards for a touchdown on a fourth-and-2 play. Spiller bounced off several defenders before waltzing into the end zone and then hitting the Florida fan section with a Gator chomp.

Florida's Evan McPherson kicked a tying 53-yard field goal with about 9½ minutes remaining, setting the stage for a wild finish.

The game was tied when Ainias Smith fumbled after a reception and the ball was recovered by Marco Wilson. The Gators cashed in on the mistake when Trask threw a 1-yard touchdown pass to Dameon Pierce to make it 38-31 with about six minutes left.

Kyle Pitts gave the Gators an early lead when he leaped above two defenders for a 5-yard touchdown reception on the first drive. The Aggies tied it up when Mond connected with Chase Lane on an 11-yard TD on their first possession.

Trask’s second TD pass came on the next drive when he found Toney for an 11-yard grab.

Mond then orchestrated a 14-play, 94-yard drive capped by a touchdown pass to Chapman after that.

Florida regained the lead on Nay’Quan Wright’s 1-yard scoring run with about four minutes left in the second.

A field goal by the Aggies at the end of the second cut the lead to 21-17 at halftime.

Both teams showed off their offensive firepower, but will need to improve on defense after a game where the teams combined for more than 900 yards.

Mullen thought A&M's crowd played a factor in win, even though only 24,709 fans were allowed because of the coronavirus. Now that Florida Gov. Ron DeSantis has lifted capacity restrictions at sporting events in the state, Mullen wants to see a much bigger crowd than he saw Saturday when the Gators are at home next week.

“I certainly hope our university administration follows the governor," Mullen said. “The governor has passed a rule that we’re allowed to pack the Swamp and have 90,000 in the Swamp to give us the home-field advantage Texas A&M had."

The Aggies should move up a few spots after knocking off the Gators, and Florida will certainly drop after losing to a team that didn’t really put up a fight against Alabama last week.

Florida: Hosts No. 17 LSU next Saturday in the first of two straight home games.