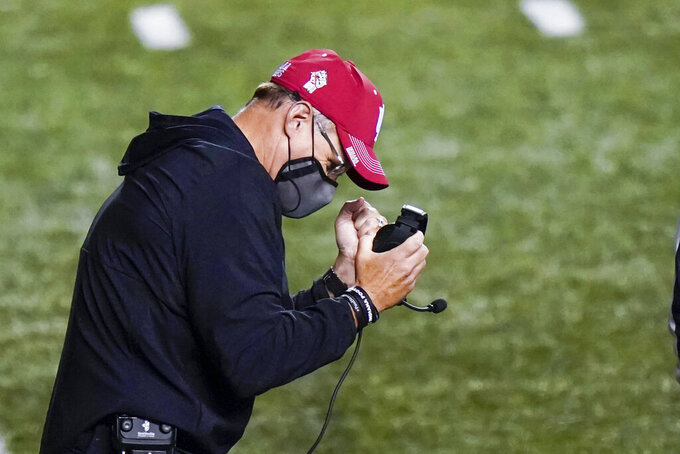 As Wommack kept sifting through the footage, he realized the opposing offenses recognized the Hoosiers defensive schemes too easily. So Wommack started mixing things up, came into the fall with a a revised plan and has embraced the early results.

“I thought, at times, we were a little too man oriented,” Wommack said Monday. “We had some great pressures and great blitzes but the ball was coming out before we could get there and the offense knew what we were in. Obviously, we looked at that in the offseason and we had to do a better job schematically. I think it has made our players' production better when we actually are in man coverage."

The changes have given Indiana (2-0) a completely different look on the field and on paper.

Currently, only two teams in the East Division are unbeaten — No. 3 Ohio State and No. 13 Indiana. After opening the season with their first upset of a top-10 team in 33 years and moving into the Top 25 for only the second time since 1994, the Hoosiers' encore was a 37-21 victory at Rutgers that gave them their highest ranking since October 1987.

If they snap a 24-game losing streak to No. 23 Michigan (1-1) on Saturday, the Hoosiers could be bound for their first top-10 appearance since September 1969.

This year's defense makes it a real possibility.

In its upset of No. 8 Penn State, Indiana forced three turnovers and held the Nittany Lions scoreless on three red-zone trips. Rutgers quarterback Noah Vedral was under constant duress last weekend and went down four times as the Hoosiers forced three more turnovers.

They start this week ranked second nationally in turnover margin per game (plus-2.0) and third in the Big Ten in yards passing allowed (182.0). Indiana's defensive efficiency against opposing quarterbacks, 118.7, is fifth in the league and they've given up a respectable 28 points per game in a season where offenses have clearly had the upper hand.

Allen realizes the improved play from a deep, talented and aggressive secondary has added some new wrinkles and a solid foundation on which Indiana can continue to build.

“You want to be multiple schematically and that's one thing we’ve tried to become more of," Allen said. “The ability to play man and zone (coverages) is super positive for us."

The Hoosiers will need an even better performance this weekend to protect their home turf.

He has a strong arm and, like Penn State's Sean Clifford and Vedral, has the ability to run —- and run over defenders.

The Hoosiers struggled to hold Clifford in check but were much improved last weekend, and if that progression continues against Michigan, the Hoosiers could check off another significant feat.

“I’m pleased with where we are as a man coverage team and frankly it was something that was a bit of a concern with how few reps we got," Wommack said. “It’s great to see those things but there are things we have to be better at. I thought containing the quarterback from Week 1 to Week 2 was significantly improved. But the key is covering people and containing the quarterback. To me that will be the challenge this week."