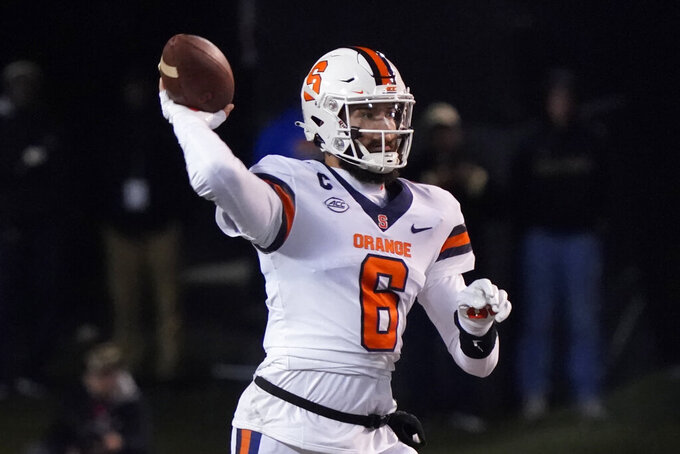 Syracuse has clinched a spot in the postseason for the first time in four years, and a victory would stop a five-game losing streak and give coach Dino Babers just his second winning regular-season mark in his seven years at the helm. A victory by the Eagles would forge a tie with the Orange at the bottom of the Atlantic Division and make Syracuse just the fourth team to start a season with six wins and finish with six straight losses, joining Miami (Ohio), Illinois and Baylor.

Syracuse passing offense vs. BC secondary: The Orange average 217.8 passing yards per game (84th in the FBS). They will be facing the Eagles’ defense which ranks 39th, allowing 204.5 yards per game through the air.

Tucker needs 21 yards to become the first Syracuse player to rush for 1,000 yards in consecutive seasons since Delone Carer (2009-10). ... Syracuse has just 11 turnovers this season, 15th nationally and third in the ACC. ... The Orange rank third in the nation in kickoff returns, averaging 26.1 yards per return. ... Syracuse has outscored opponents by 5.4 points per game this season, while Boston College has been outscored by 12.9 per game. ... Syracuse has been a top-25 defensive unit in terms of passing yards, ranking 13th-best by allowing only 183.0 yards per game. The Orange rank 84th on offense (217.8 passing yards per game). ... Boston College has generated 62.3 rushing yards per game, which ranks worst in college football. It ranks 91st with 168.3 rushing yards surrendered per contest. ... Syracuse plays its third straight night game, and fifth overall.