Syracuse is unbeaten, ranked No. 18 and a surprise in ACC 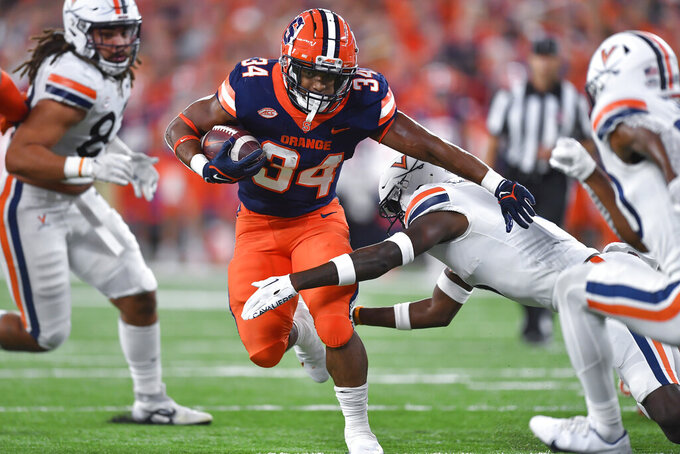 Syracuse running back Sean Tucker (34) tries to break a tackle by Virginia cornerback Anthony Johnson during the first half of an NCAA college football game Friday, Sept. 23, 2022, in Syracuse, N.Y. (AP Photo/Adrian Kraus)

Last season, Syracuse finished 5-7 and suffered three straight losses by three points. So far this season, the Orange are 2-0 in nailbiters: 32-29 over Purdue when Garrett Shrader threw a 25-yard touchdown pass to Oronde Gadsden II with 7 seconds left, and 22-20 against Virginia thanks to a a 31-yard field goal with 74 seconds left by Andre Szmyt — his career-high fifth of the game.

So, how has the most penalized team in the nation — averaging 10 a game, tied with Cincinnati — remained perfect? It's a combination of things, and luck is probably among them.

The offense guided by new coordinator Robert Anae is tied for ninth nationally with No. 8 Oklahoma State, scoring on 23 of 24 trips (15 TDs, eight field goals) into the red zone.

And Szmyt, with the oversight of new special teams coach Bob Ligashesky, has regained his form from four years ago, when he was voted the best kicker in the nation. Szmyt has missed only once in 11 field goal attempts.

The defense, led by linebackers Mikel Jones and Marlowe Wax and defensive back Garrett Williams, indicated early that this season might be different in a dominating 31-7 season-opening victory over Louisville at home.

The Cardinals had beaten Syracuse badly three straight times on their home turf, but this time, Louisville quarterback Malik Cunningham was unable to get rolling like last year, when he accounted for five touchdowns in the first half of a 41-3 beatdown. He was intercepted twice and lost a fumble and the Syracuse offense converted two of the turnovers into touchdowns.

“I think that the defense is really, really together,” Babers said. “I think that this feeling is growing and hopefully we continue to water it and nurture it so it can become fully blossomed into something that can carry us on the back part of the season.”

Syracuse also won the two close ones, ironically, with a lot of help from penalties. The Boilermakers ended up with 13, the final four infractions called after they had taken a 29-25 lead with 51 seconds left, and Shrader took advantage.

Against the Cavaliers, Syracuse suffered its first turnovers of the season — an interception and three lost fumbles. But the defense pitched a shutout in the first half and Virginia matched the Orange with a dozen penalties, the most critical a facemask infraction on a third-and-7 play that kept alive the game-winning drive.

“I think everybody from the inside was expecting this,” receiver Courtney Jackson said. “I think it really puts us in a good place for the rest of our season and actually making something happen.”

In his second season with Syracuse after transferring from Mississippi State, the 6-foot-4, 228-pound Shrader has relied more on his right arm than his legs this season, the result of months of work in a fast-paced new system that accentuates short and mid-range throws. Shrader is 90 for 127 (70.9%) for 1,224 yards and 10 TDs, already one more score than last season, when he completed just 52.5% of his passes.

“He’s made himself very dangerous," Babers said. "You have to pick your poison ... with the guys that he has around him. He’s taken advantage of his situation and he’s playing at a very, very high level.”

One of those guys is All-American tailback Sean Tucker, who averaged 6.1 yards per carry and had a school-record 1,496 yards rushing last season. He's rushed for 546 yards and five touchdowns and has caught 19 passes for 184 yards and another score this year, though against the three Power 5 opponents the Orange have beaten he's averaged just 3.36 yards on 60 carries.

Opposing coaches have focused on limiting Tucker's production by stacking the line of scrimmage and that has allowed the 6-foot-5 Oronde Gadsden to emerge. A sophomore with scant experience whose father played for the Miami Dolphins, Gadsden poses a difficult challenge for single coverage and leads the team with 23 catches for 366 yards and three TDs.

Syracuse resumes play Saturday at home against No. 15 North Carolina State, then travels to No. 4 Clemson.

Babers worries about depth and the Orange already have lost a handful of starters to injury, including star linebacker Stefon Thompson and versatile fullback Chris Elmore.

“Very concerned. Don't sleep well," Babers said. "We're averaging losing a starter per game and the backups who are now starters have done a really, really good job. But if we're going to continue to lose one a game I don't know how that's going to look ... in the end.

"The train's left. We can't put anybody else on it."