TCU heads to Kansas with both teams eying much-needed win 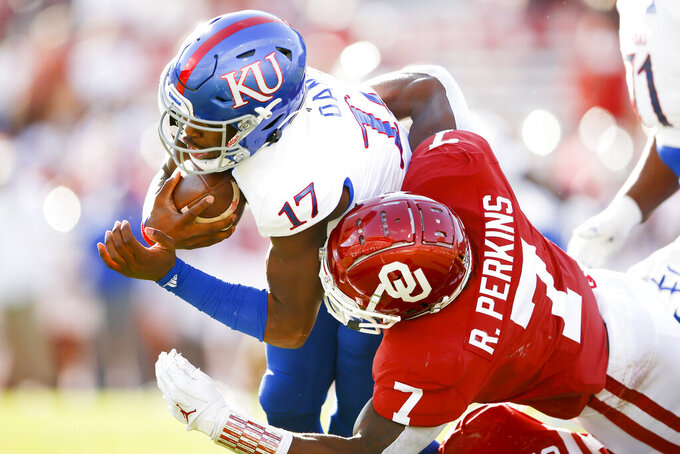 LAWRENCE, Kan. (AP) — Kansas has been competitive in precious few games over the past few years.

Not that TCU would know it.

Every time the Horned Frogs visit Lawrence, they end up in a tussle. They lost 27-26 when they coughed up a fumble in the red zone inside the final minute two years ago, and coach Gary Patterson's crew needed 10 points in the fourth quarter to steal a 24-23 victory in 2016. TCU also edged the Jayhawks 34-30 in 2014 and 20-6 in 2012, the first time the schools met at Memorial Stadium following the Horned Frogs' move from the Mountain West to the Big 12.

“I don’t know," Patterson replied, when asked this week about his team's consistent struggles in Lawrence. “Really, I don’t know. If anything about us, we need to play better. We have to control us.”

Both teams arrive at Saturday's game with losing records, yet both also have plenty on the line.

The Horned Frogs (3-4) are trying to bounce back from a lopsided loss to West Virginia and ultimately qualify for a bowl game with a game against Oklahoma State still on the schedule. Kansas (0-7) had its game against Texas postponed last week, and are still in search of their first win with Texas Tech and the Longhorns still on deck.

They're certainly ready to see some of that playing hard translate into wins, though.

“I think the relationship you have with your team speaks to how they will respond in times of crisis,” Kansas coach Les Miles said. “I don't know exactly how you view this year, but I would have to think this team, even though they have struggled at times, they have handled this calendar and what this calendar brought very well.”

One of the strengths of Kansas this season was supposed to be the offensive line, but lousy performances capped by a nine-sack meltdown against Oklahoma prompted a major change: Miles fired position coach Luke Meadows and put offensive analyst John Morookian in the role for the remainder of the season.

“We're looking forward to seeing him take the remainder of this week and the next two,” Miles said, “and see what kind of coach he is.”

The prevailing feel within the Jayhawks program this week was optimism, despite the fact that Kansas hasn't been within two touchdowns of an opponent since an opening loss to Coastal Carolina.

“We're still preparing to do something great here,” senior linebacker Kyron Johnson said. “Yeah, we don't have any wins under our belt, but there's still three games and three chances for us to show what we can do this season.”

TCU wide receiver Derius Davis, who is also a dangerous punt returner, will be back this week. He had strep throat and missed the Horned Frogs' game against West Virginia two weeks ago.

Jayhawks quarterback Jalon Daniels also will be back. He hurt his ankle late in their loss to Oklahoma and likely would have missed the game against Texas had it been played.

One thing the Horned Frogs won't be concerned with the rest of the season is classwork. TCU pushed its finals schedule to this past week so students would not need to return after Thanksgiving.

“The bad news is we had to pause to get ready for finals,” Patterson said, “but the good news is finals are over and we can play two games without any schoolwork.”

Kansas will still have senior day ceremonies Saturday, even though the Texas makeup game will be played at Memorial Stadium on Dec. 12. That allows family members of seniors who had already made travel plans to be on hand, even though all other fans will be barred due to COVID-19 restrictions.