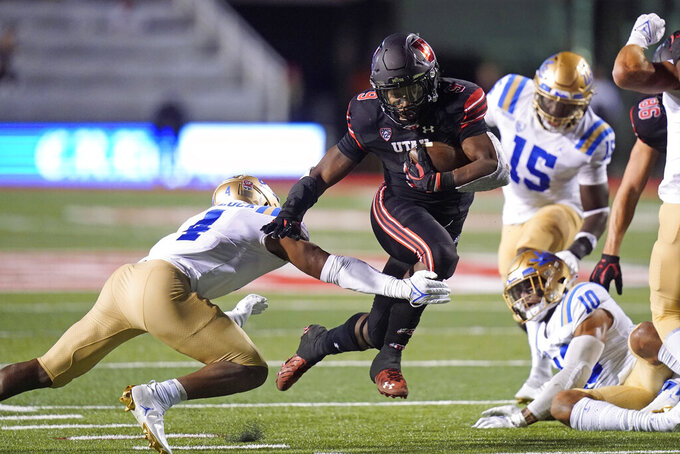 Utah running back Tavion Thomas (9) carries the ball for a touchdown as UCLA defensive back Stephan Blaylock (4) tries to defend in the second half during an NCAA college football game Saturday, Oct. 30, 2021, in Salt Lake City. (AP Photo/Rick Bowmer)

SALT LAKE CITY (AP) — Tavion Thomas rushed for a career-high 160 yards and a school record-tying four touchdowns to power Utah to a 44-24 win Saturday night as the school retired the number 22 in honor of the untimely deaths of Ty Jordan and Aaron Lowe.

“My O-line was moving that thing. It made it easy for me the way they were working together,” Thomas said.

Cam Rising threw for 179 yards and a touchdown and ran for another score to run Utah’s winning streak against the Bruins to five.

“We got a group of dogs and they just don’t stop going. They just keep that gas pedal tilted down and just go. It’s really fun and I’m happy to be a part of it,” Rising said.

If his passing and running wasn’t enough, Rising even punted twice in quick-kick situations and had them both downed inside the 10-yard line.

But the key was running the ball, according to Utah coach Kyle Whittingham.

“They led the league (allowing just 94.9 yards rushing per game going into the game) and we got 297,” Whittingham said. “Tavion was outstanding. He’s really turned into a workhorse for us.”

Utah (5-3, 4-1 Pac-12) is alone atop the conference’s south division and has beaten the other three contenders – the Bruins, USC and Arizona State, the only other team with fewer than three Pac-12 losses.

Freshman Ethan Garbers threw for 265 yards and two touchdowns on 27-for-44 passing with an interception for UCLA (5-4, 3-3). He made his first career start in place of Dorian Thompson-Robinson, who was injured on the Bruins’ final possession of last week’s loss to Oregon.

“Garbers is a cool customer … to come out and play in this environment and just to rally the troops, battling right down to the end. I’m happy with the way Ethan played,” UCLA coach Chip Kelly said.

Utah clinched the game with a safety – a sack by Hauati Pututau with 7:16 remaining – and an ensuing deliberate touchdown drive that forced the Bruins to use all three of their timeouts.

UCLA converted four fourth-downs, including a 30-yard Zach Charbonnet TD run, in the first half to try to keep pace with the potent Utah attack but only had 10 points to show for it. The Utes, on the other hand, scored on their first four drives. Three of them culminated on touchdown runs by Thomas and Utah led 28-10 at halftime.

“We had been a really good team preventing the rush coming into this game. Tonight, obviously, we could not control their run game,” Kelly said.

The last time a Utah player had four rushing TDs in a game was Joe Williams in 2016, also against UCLA.

Ty Jordan and Aaron Lowe who both tragically died in the past year were honored at the end of the first quarter and the number ‘22’ was retired. Jordan wore the number during a sensational freshman year before dying on Christmas night 2020. His friend Lowe was chosen to wear 22 in his honor and then was killed outside a party on Sept. 26. Utah had previously never retired a football number.

OFFENSE OVER DEFENSE AT UTAH?

Under Whittingham, the Utes always defer to the second half if they win the coin toss. Against UCLA, Utah elected to take the ball first, in part because defensive leader Devin Lloyd was serving a first-half suspension due to targeting against Oregon State. Rising was happy to start the game with the ball for once.

“Let’s go score a touchdown,” Rising said to his offense. And they did — Thomas ran for a 10-yard TD on the opening drive.

UCLA: The Bruins were able to move the ball with Garbers at the controls but an interception and the safety were too much to overcome as UCLA’s defense could not stop Utah’s rushing attack.

Utah: The Utes played turnover-free football and converted eight of 12 third downs to keep them in control most of the game. Utah now has complete control of their destiny and pole position for the South title.

UCLA has a bye before hosting Colorado on Nov. 13.