Utah to retire No. 22 to honor Jordan and Lowe 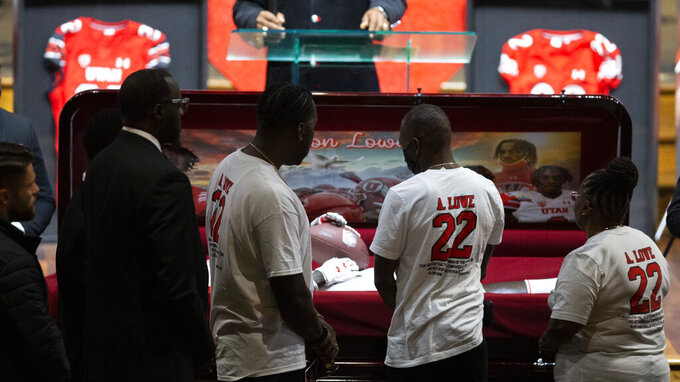 Friends and family pay their respects to Aaron Lowe during a funeral service at Family Cathedral of Praise, Monday, Oct. 11, 2021, in Mesquite, Texas. Lowe, a student and football player at the University of Utah, was was shot and killed on Sept. 26 at a post-game party. (AP Photo/Brandon Wade)

SALT LAKE CITY (AP) — Utah will retire jersey No. 22 during its game against UCLA on Saturday to honor Ty Jordan and Aaron Lowe, friends and teammates who died nine months apart.

The No. 22 will be the first jersey retired in program history, the school announced Monday.

Jordan died at 19 in an accidental shooting on Christmas night 2020 and Lowe changed his number to honor his friend, who had also been his teammate at West Mesquite High School in Texas.

The 21-year-old Lowe was shot at a house party on Sept. 26, hours after Utah's game against Washington State. He was laid to rest next to his friend earlier this month.

Utah has created scholarships in the two players' names and debuted a tribute video against Arizona State on Oct. 16. The video will be played at every home game.