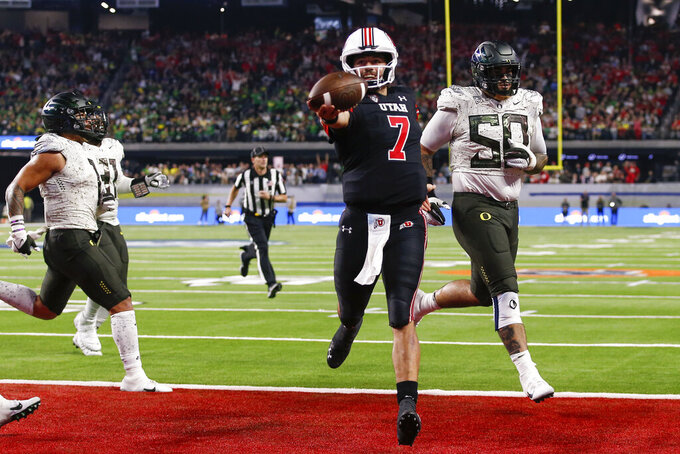 In 1986, the Utes were a struggling program in the Western Athletic Conference when they went to Columbus and were drilled 64-6 by the Buckeyes.

Thirty five years later, Utah will be making its first Rose Bowl trip as the Pac-12 champion when it faces Ohio State in the 108th edition of the Granddaddy of Them All on New Year's Day.

The tenth-ranked Utes (10-3) defeated Oregon 38-10 Friday to capture their first Pac-12 championship since joining the conference in 2011.

“This is the next step in evolution as a program,” coach Kyle Whittingham said during a conference call Sunday. “We had been to the Pac-12 championship game three times but this is the first time we were able to get over the mountain. It was something we had been shooting for and had our sights set on for a number of years.”

Some may wonder if the archrival Wolverines and in-state cohort Cincinnati qualifying for the CFP means the No. 7 Buckeyes (10-2) might be in for a letdown, but coach Ryan Day tried to downplay that.

“The goal here is to win championships. We didn’t reach that. But we have an opportunity to play in a tradition-rich bowl, and that means a lot," Day said. "I know our guys want to play hard and win that game.”

Both programs do have one thing in common — Urban Meyer. The Utes started their climb toward prominence after Meyer was hired in 2003. In his two years with the program, they went 22-2, including a victory over Pittsburgh in the Fiesta Bowl to conclude the 2004 season.

Meyer took over at Ohio State in 2012 and led the Buckeyes to a national championship in 2014. Ohio State’s last appearance in the Rose Bowl was during the 2018 season when it defeated Washington in what would be Meyer’s final game on the Buckeyes’ sideline after he announced his retirement a couple weeks earlier.

Whittingham is in his 17th year leading Utah and took over after Meyer left for Florida.

“I had been at Utah for eight-nine years, thought I would be the guy (in 2003). I was disappointed Urban got it but it ended up being the best thing that happened to me,” Whittingham said. “I got to see the level of organization, how he ran a program and absorbed things that were invaluable.”

Utah started the season by dropping two of its first three games but has won nine of its last 10, including two victories over the Ducks.

Whittingham's squad has played through grief and adversity during the past year after two players died in a nine-month span. Running back Ty Jordan, who was the Pac-12's Freshman of the Year last season, died in an accidental shooting last December. Cornerback Aaron Lowe, Jordan's best friend, was killed Sept. 26 in a shooting during a house party in Salt Lake City.

“I couldn’t be more proud of our leaders and the ownership they took. The captains and underclassmen kept things together,” Whittingham said. “For us to get through it and continue to play at a high level is a credit to our guys.”

Ohio State had hopes of appearing in the College Football Playoff for the third straight season and was in the top four most of the season. But the Buckeyes were knocked out of contention with a 42-27 loss at Michigan.

While Utah is a Rose Bowl rookie, the Buckeyes are frequent visitors. The Buckeyes will be making their 16th trip to Pasadena and their second in four years.

Running back Tavion Thomas might have something extra to play for in this game. The sophomore is from Dayton, Ohio, and is tied for the Football Bowl Subdivision lead with 20 rushing touchdowns while averaging 5.6 yards per carry.

Linebacker Devin Lloyd is the only Power Five player with at least 14.5 tackles for loss (22) and multiple interceptions (four).

Ohio State quarterback C.J. Stroud is the first player in Big Ten history to be named the conference’s offensive player of the year, freshman of the year and quarterback of the year in the same season. He passed for 3,862 yards and 38 touchdowns.