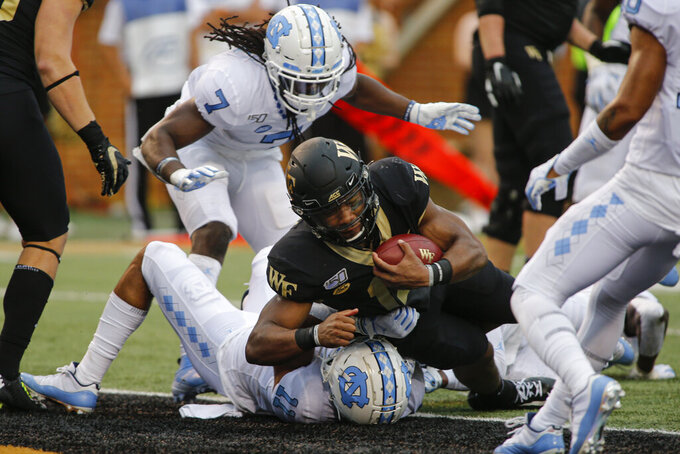 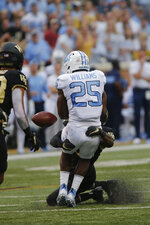 WINSTON-SALEM, N.C. (AP) — Jamie Newman and Wake Forest had gone from dominant to hanging on, with North Carolina on the verge of yet another fourth-quarter comeback in a suddenly tense finish.

Yet these Demon Deacons have proven they can come up with big late-game plays, too.

Newman directed a clock-draining fourth-quarter drive, then watched as the Tar Heels ran out of time on their desperate final possession in Wake Forest's 24-18 win Friday night in an unusual nonconference matchup between same-state Atlantic Coast Conference teams.

"Making those first downs and driving the ball, that drive was the game-saver," Demon Deacons coach Dave Clawson said. "Because if they get the ball back at midfield or on their 30 with 4½ minutes left and three timeouts, I wasn't feeling real good about it."

Newman and the Demon Deacons (3-0) took care of that.

The Tar Heels (2-1) had just closed a 21-0 deficit to 21-18 on Sam Howell's second fourth-quarter touchdown pass with 6:09 left, and the pressure increased when Newman took a sack to set up a second-and-16.

But Newman hit Scotty Washington for a 27-yard gain over the middle, then followed three plays later with a 4-yard scramble on third down to keep possession. That drive ultimately forced the Tar Heels to use all three of their timeouts, though not before Wake Forest had burned 5 minutes and tacked on a field goal.

That 12-play, 61-yard drive wasn't as dramatic as the one Newman led in the opener, ending with winning fourth-down touchdown throw with 1:08 left to beat Utah State.

It was a winner all the same.

"We stayed calm on the sideline," Newman said. "We didn't panic. We've been in those situations before."

UNC had a final drive, but the game ended when Michael Carter didn't get out of bounds in time on a run to set up a final desperation heave from just across midfield.

"The first half, we didn't feel like ourselves," Howell said. "Most of that is because of me. I didn't play very well in the first half. We just fought as hard as we could in the second half and ended up running out of time."

UNC: The Tar Heels came in brimming with confidence after rallying from 20-9 down against South Carolina in the opener, then beating Miami on Howell's TD throw with 61 seconds left last week. This time, they dug themselves a hole they couldn't come back from with a miserable first-half performance then couldn't get the late-game stop quick enough to pull off another rally.

"I didn't think we played well emotionally in the first quarter and parts of the first half," UNC coach Mack Brown said, adding: "We weren't used to this position to be in."

Wake Forest: The good news is Wake Forest spent much of this one pushing the Tar Heels around, with Kenneth Walker running for 94 yards and receiver Sage Surratt having a career-best day with nine catches for 169 yards and a 51-yard TD catch from Newman. The bad news is Wake Forest didn't finish particularly well outside of that clock-killing drive, watching a well-in-hand game get unexpectedly tense in the final minutes.

The Tar Heels were running out of time after Howell was taken down on a 3-yard run, forcing a hurried fourth-down play. Carter took the handoff and headed toward the UNC sideline for 13 yards with a chance to get out of bounds and stop the clock.

But Carter was pushed out of bounds by tacklers, and officials ran off the field immediately without a replay as Wake Forest's bench began spilling onto the field to celebrate.

"Honestly I kind of slowed down to try to set the blocks up," Carter said. "If I would've just run straight out of bounds, we probably would've had probably like 3 seconds left. But I thought it was going to be the last play of the game. That was a mental error by me."

UNC didn't have starting receiver Antoine Green, center Nick Polino and defensive lineman Jason Strowbridge due to injuries, then lost offensive lineman Jordan Tucker to an apparent leg injury. For Wake Forest, No. 2 rusher Cade Carney didn't play due to injury, though Clawson said he was available in an emergency.

OUT OF THE ACC

This one doesn't count in the ACC standings. The teams had agreed in 2015 to play this year and in 2021 instead of waiting until 2022 for their next ACC matchup amid the 14-team league's scheduling rotation for teams in opposite divisions.