After NIL, next NCAA challenge is restructuring Division I 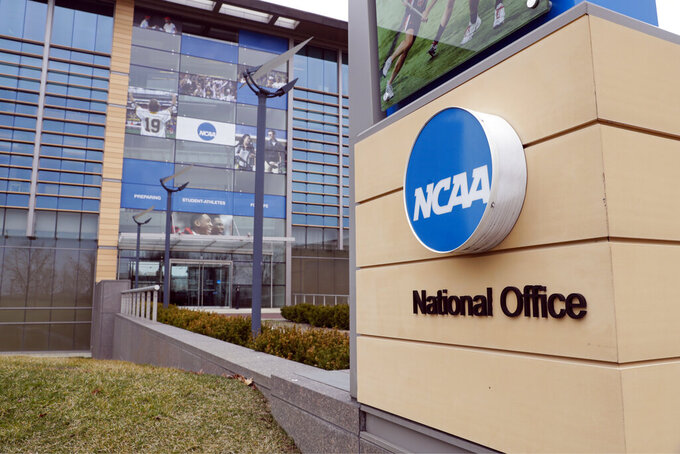 FILE - In this March 12, 2020, file photo, the national office of the NCAA in Indianapolis is shown. A set of proposals to permit NCAA athletes to earn money from endorsements and sponsorships deals will go up for vote in January, the last step for the association to change its rules but not the last word on how name, image and likeness compensation will work. (AP Photo/Michael Conroy, File)

As the NCAA moves toward landmark changes that will empower athletes more than ever, the next big debate within college sports is on the horizon: How to reform and restructure Division I?

A survey of college sports leaders, including university presidents, conference commissioners and athletic directors, was released earlier this week by the academic watchdog Knight Commission on Intercollegiate Athletics.

The survey results went public the day before the NCAA Division I Council approved two proposals that will lift longstanding restrictions on college athletes.

On Wednesday, the council rubber-stamped proposed legislation that will allow college athletes to earn money off their names, images and likenesses — through things such as personal endorsement deals and appearance fees — as never before.

The council also gave the go-ahead to expanding the one-time transfer exception to all athletes, giving players in revenue-generating sports such as football and basketball the ability to switch schools one time as an undergrad and be immediately eligible to compete. Current rules require athletes in those sports, along with baseball and hockey, to sit out a year after transferring as undergraduates.

Both proposals now go to membership for comment and feedback and could be tweaked before they go back to the Council for a vote in January.

Federal lawmakers still need to weigh in on name, image and likeness rules, but NIL compensation and less restrictive transfer rules should be in place for the 2021-22 school year.

Those issues, which had been debated and argued for years as the NCAA held firm to its old rules, have now been settled in favor of what college sports leaders now frame as modernization.

The next big project in college sports, especially as institutions deal with the financial fallout of the coronavirus pandemic, could be deciding what Division I should be. Or more precisely, what do the schools that make up D-I want to be?

“I think there is going to be a great deal of interest in ‘Where does my institution fit best in this environment?’” said Nancy Zimpher, former chancellor of the State University of New York and a member of the Knight Commission.

Zimpher said university presidents should be willing to ask hard questions about what kind of investments they want to make in football and basketball in the hope the revenue from those sports can fund others.

“I hope that campuses and conferences will open themselves to some new arrangements to solve some of these heavy financial challenges," said Zimpher, chairwoman of the Knight Commission's college sports governance and structure committee.

The survey found strong support for reforming the way Division I is governed (74%) and restructuring D-I altogether (73%). NCAA Division I is comprised of 351 schools that range from massive Power Five football schools such as Ohio State, Alabama and Texas to small private universities mostly focused on trying to access the lucrative NCAA men’s basketball tournament. Athletic budgets range from $4 million to more than $200 million, according to data collected by the Knight Commission.

There is far less consensus on what needs to be done to address the problem.

Among respondents at schools without football programs, 65% said they would likely favor separating the highest level of Division I football (FBS) from the NCAA and creating a new body to manage that sport. There are 130 FBS schools.

But 42% of respondents at FBS schools oppose that type of change.

Among Power Five respondents, 61% said they were very or somewhat likely to support the creation of a separate new division within the NCAA for the Power Five to compete in sports other than men’s and women’s basketball.

There was broad support for keeping March Madness as is. The men's basketball tournament generates most of the NCAA's revenue, which surpassed $1 billion in 2019.

But while those in Power Five would like for those wealthy conferences — the ACC, Big Ten, Big 12, Pac-12 and SEC — to have even more autonomy, nearly 60% of respondents from the other 27 Division I leagues, including the other five in FBS, oppose creating a fourth NCAA Division.

Zimpher said the Knight Commission would like to take a role in creating that consensus by bringing together the ultimate decision-makers: university presidents.

She cited the conference-by-conference approach to staging this major college football season as an example of the NCAA's inability to bring leaders together to find big-picture solutions.

“We don't have one body that really speaks for everybody,” she said. “In fact we may have multiple bodies, but we have to create consensus around the principles. And, yes, (NCAA President) Mark Emmert and whoever leads the NCAA is a responsible leader. But the presidents are in charge. This is their organization or set or organizations. And it falls to them to create coherence."