Babers prepares for year 4 at Syracuse after 10-win season 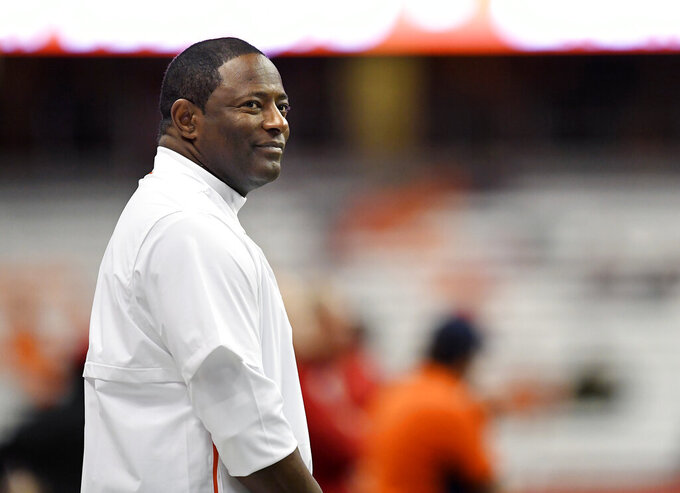 FILE - In this Nov. 9, 2018, file photo, Syracuse head coach Dino Babers watches his players warm up prior to an NCAA college football game against Louisville in Syracuse, N.Y. Syracuse is coming off a breakthrough season that even surprised coach Dino Babers a little bit. Keeping the momentum going is of paramount importance. (AP Photo/Adrian Kraus, File)

SYRACUSE, N.Y. (AP) — Syracuse is coming off a breakthrough season that even surprised coach Dino Babers a little bit. Keeping the momentum going is of paramount importance.

Last season produced double-digit wins (10) for the first time in nearly two decades with often-injured senior quarterback Eric Dungey at the helm. Now it's Tommy DeVito's turn to lead an up-tempo offense that averaged 40 points and 5.7 yards per play last season. He's well-prepared. DeVito has taken most of the first-string snaps in spring ball two straight years and appeared in eight games last season, going 44 of 87 for 525 yards and four touchdowns with three interceptions.

Most important of all, perhaps, is DeVito had mixed results. He led Syracuse to victories over Florida State and North Carolina in relief of Dungey and also struggled in two games, most notably against Notre Dame (six sacks, two interceptions).

"I think that last year was very important to him," Babers said. "Some of the things that I feel that are critical to his development, you might not see it the same way. For him not to have success was a positive. I think those negatives are going to feed him so that he can have the type of attitude that he needs throughout the summer to be the type of quarterback that he's capable of being. I think he's made from the right cloth."

The Orange open the season Aug. 31 at Liberty.

Other things to know about Syracuse, which won six of eight games in Atlantic Coast Conference play and finished 2018 ranked No. 15:

Dungey accounted for 60 percent of Syracuse's total yards last season and 33 of its 60 offensive touchdowns. And he gave Syracuse a big advantage with his running ability (155 attempts for 869 yards and five TDs). DeVito finished the season with minus-17 yards rushing on 23 attempts, most of that the result of 11 sacks.

"I think that with myself not being as big of a runner as Eric was, teams are definitely going to take notice of that and try to attack that," DeVito said. "But we're also going to have ways to bounce back and attack them as well."

What Syracuse doesn't have is experience at backup. Junior college transfer Clayton Welch is listed No. 2 on the depth chart and Rex Culpepper, who is healthy again after being treated for testicular cancer, is also in the mix after a brief stint at tight end.

If DeVito is going to shine, the offensive line will have to perform at a high level since he's not as mobile as Dungey. The Orange lost three starters who accounted for 3,275 offensive snaps in 2018. Airon Servais has shifted to right tackle and right guard Evan Adams has 33 starts. Sam Heckel replaces Servais at center. The left side includes redshirt sophomore guard Dakota Davis and redshirt freshman tackle Carlos Vettorello. Davis played 50 offensive snaps and Vettorello logged 25 in two games.

"We've got a lot of things to replace," Babers said. "You're only as good as your offense and defensive line."

"A lot of guys are playing with confidence," Coleman said. "We know who we are. We have a team identity now. We know that a lot of people are probably doubting we can do it again, so we've got a lot to prove, too."

Syracuse was coming off three straight 4-8 seasons prior to 2018, so the Orange likely caught some teams a little bit off-guard. They don't expect that to happen again.

"When you go from four wins to 10 wins, part of it is because teams are sleeping on the team that they are playing," said free safety Andre Cisco, who tied for the national lead with seven interceptions as a freshman, was named ACC defensive rookie of the year, and earned All-America honors. "Now we've got to understand that teams are trying to upset us. It's a different mindset and we've got to really come hungry. Guys expect to win now."

If there's one thing Babers can bank on, it's special teams. All-America place-kicker Andre Szmyt won the Lou Groza Award as the nation's best, converting 30 of 34 field goals and all 61 PATs he attempted for a national-best 151 points. Punter Sterling Hofrichter ranked second in the ACC in gross punting average (42.9) and led the conference with 26 punts downed inside the 20-yard line. The only change is long snapper Aaron Bolinsky.