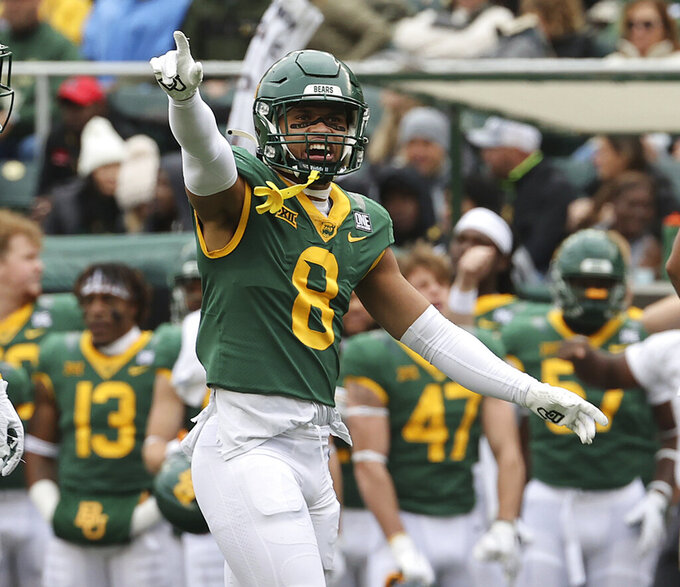 Baylor safety Jalen Pitre shouts to his teammates in the first half of an NCAA college football game against Texas Tech, Saturday, Nov. 27, 2021, in Waco, Texas. (AP Photo/Jerry Larson)

IRVING, Texas (AP) — Big 12 rushing leader Breece Hall was named the Big 12's offensive player of the year Thursday by league coaches, with the Iowa State junior becoming only the third player to earn the honor in back-to-back seasons.

Hall has rushed for 1,472 yards and 20 TDs this season for Cyclones. He has run for a touchdown in each of his last 24 games, an FBS-record streak.

Baylor senior Jalen Pitre was tabbed defensive player of the year while playing a hybrid-defensive back position. Pitre is the only player in the nation with at least three forced fumbles, three fumble recoveries and two interceptions. His 63 tackles include a team-high 12 for losses.

Oklahoma State's Mike Gundy, whose fifth-ranked Cowboys play in their first Big 12 title game Saturday against No. 9 Baylor, was selected by his peers as the league's top coach.

The only other players to be the Big 12 offensive player of the year in consecutive seasons were Texas running back Ricky Williams (1997-98) and Oklahoma quarterback Jason White (2003-04). Former Sooners quarterback Baker Mayfield was also a two-time winner, in 2015 and 2017. All three won a Heisman Trophy.